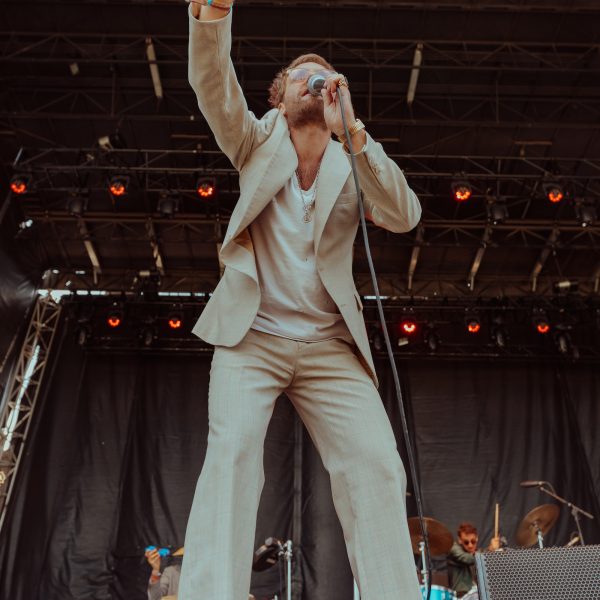 For singer-songwriter Maxim Ludwig, rock and roll isn’t confined to the stage: it’s a lifestyle.

After an afternoon performance at Arroyo Seco Weekend amongst headliners such as Neil Young and Jeff Goldblum, Ludwig left the stage for his band’s trailer.

But the journey wasn’t easy. He was stopped along the way by Goldblum, who referred to him only as Jude Law, a compliment so charming Ludwig had no other option but to escape the irresistible actor turned musician.

Back in his trailer, Ludwig was finally able to “chill,” his mind free from the stresses of performing and focused on the food he would be eating throughout the day.

Surrounded by suits, empty La Croix cans, gold chains and pinky rings, Ludwig’s trailer is as rock and roll as it gets.

“Yes, there is a guy rolling a joint right now,” said Ludwig.

It’s the Maxim Ludwig experience, bandmembers always coming and going, sharing stories and playing off each other’s spontaneous humor. It’s a casual closeness only brought about with time.

“They’re guys I’ve been playing with forever. I’ve known my guitarist who’s my producer, engineer and sometimes cowriter since elementary school. I’ve known my drummer since he was 16. We all trust each other. We speak the same language. We make music together in this wonderful way,” said Ludwig.

There’s no explanations needed, making the music-making process all the more clear. And for Ludwig, that’s what he’s headed for.

“Musically, I’m going toward honesty,” said Ludwig, who considered his first record, All My Nightmares, a cry for help. “It’s an upbeat song with so much self-loathing and self-deprecation.”

It’s an irony found even in the band name itself.

“What are you going to do when your name is Maxim Ludwig,” said Ludwig. “Also, I’m an egomaniac.”

But the contradictions only add to the authenticity of the band.

“For me, authenticity is whatever you make it. I don’t care what people think of me when it comes to my lyrics,” said Ludwig. “I make music that I want to listen to.”

And for Ludwig, that starts with realizing what music doesn’t exist.

“There are bands out there that you go, ‘Oh they’re good, but I’d rather listen to the real thing,’” said Ludwig.

That’s why Ludwig listens to his own music.

“I make songs that I’ve never heard before,” said Ludwig.

But Ludwig isn’t just the band’s frontman. He also dresses every bandmate.

“When you have a job, you dress for it. You’re presenting yourself. To me, the suits are a dichotomy between the lyrics and my personality, because I think it’s kind of funny to see a guy like me in a suit,” said Ludwig.

To Ludwig, it’s all about capturing the idea of a man out of place.

“I call our look New Year’s morning. It’s January first. Everyone’s hungover, but they’re in a suit and they don’t know where their shoe is,” said Ludwig.

It’s an authenticity most aren’t willing to present, but Ludwig is, and proudly so.

“I’m aware of how strange I am,” said Ludwig, wearing his three-piece suit, vest included.