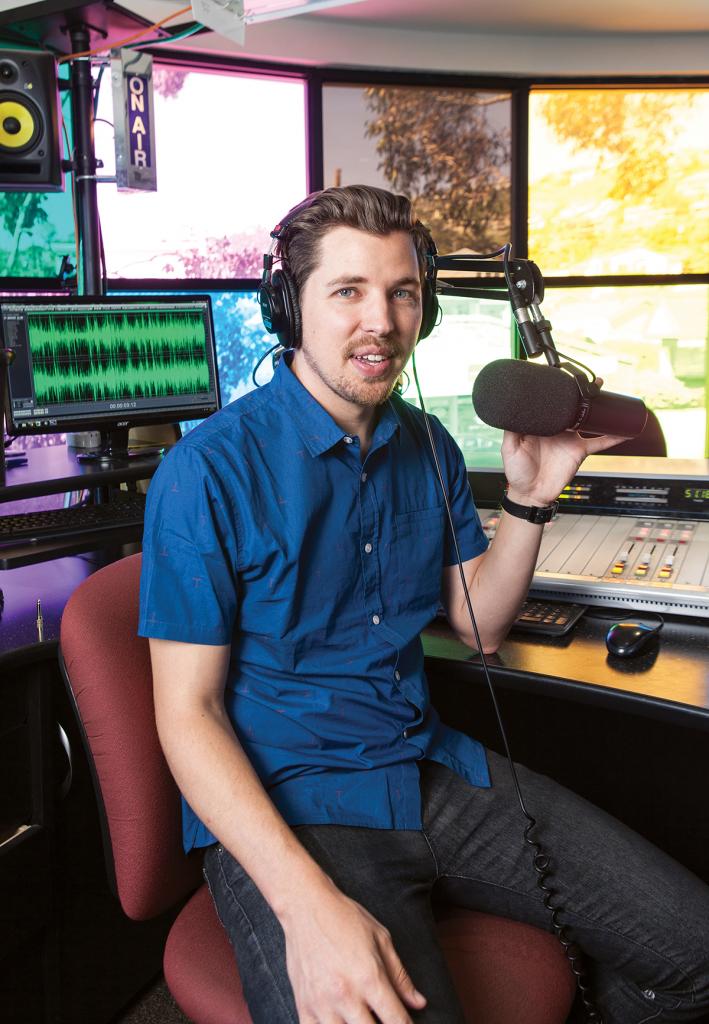 GETTING AIRTIME
TR: I was 21 when I first started working in radio. I was super excited, but it quickly became clear to me that the corporate attitude was slowly sucking the soul out of the medium. I was browsing online one day and I found this small, low-powered radio station owned by a church in Laguna Niguel. They were about to lose their license back to the FCC (Federal Communications Commission) because they weren’t on the air. So I approached the pastor of the church and said, “Would you consider transferring it to us?”

STANDOUT SHOWS
TR: There are a couple of volunteers who have turned the station into something special. One is Greg Friedman, who hosts a show called “Inner Journey” on Sunday nights. He’s a modern-day shaman. He leads people on excursions to exotic places to help them discover themselves. He started this little advice show, which has more than 40,000 likes on Facebook, and he gets callers from all over the world.

A.M. DRIVE TIME
TR: My co-host Jason Feddy is the real star. He’s British, kind of a loved local treasure. He does a segment every Friday called “Jason Sings the Police Blotter” inspired by a minor crime that happened in town. It’s a riot. It’s definitely the most popular thing we do.

MUSICAL MIX
TR: During the day, when Jason and I and our afternoon guy Zach (Churchill) are on the air, it’s mostly alternative and indie rock. But at night and on weekends, when it switches to volunteers, we’ve got rock, jazz, ska, reggae, folk. So it goes all over the map.

VETTING VOLUNTEERS
TR: If you have no background, if you feel unqualified, if you don’t know how to host—that’s fine. All I care about is, do you have a passion for independent radio, do you get what we’re doing, and is the show that you’re proposing for the benefit of yourself or for the benefit of the community? And if the answer is the community, then you get why we’re doing this.