The Observatory Takes a Modern Day Nostalgia Trip with The Midnight 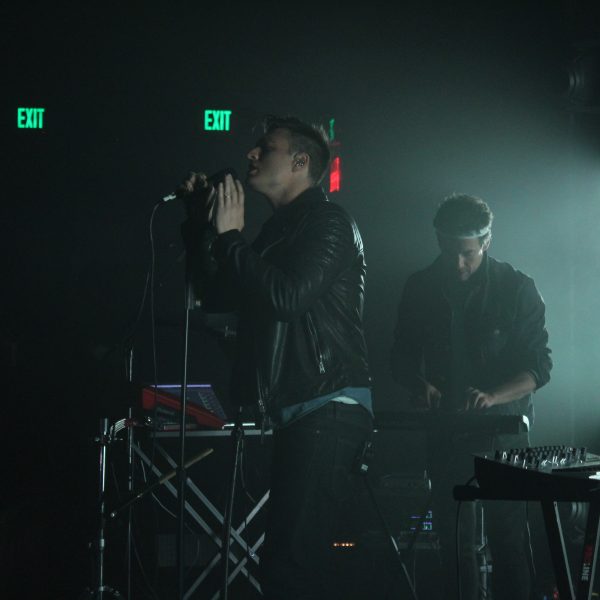 The Midnight’s musical aesthetic can be summarized in a Japanese phrase: Mono no aware. In English, it means the sad beauty of impermanence and the heartbreak of seeing time pass. Both nostalgic and retro. The Midnight captures the synthy, tight sound of 80’s music and takes a modern spin on it, amalgamating into something entirely new: Synth Wave.

Entering to the retro sounds of old video games and a computer modem start up, the two man band of vocalist/guitarist Tyler Lyle and percussionist/keyboardist, Tim McEwan, took The Observatory’s stage playing, “America Online,” a synthy daydream of a song that had been released earlier that day.

The Midnight took their performance to a smoother and deeper level with their inclusion of the saxophone. Lito Hernandez, an up- and-coming saxophonist, who recently played at Kanye West’ Coachella Sunday Service, joined the musicians in a pinnacle performance. During the first few songs you could see Hernandez onstage, patiently waiting to rip into a blazing sax solo. A minute into “Days of Thunder,” it was Hernandez’s time to shine. His energy erupted from the instrument, and the crowd went euphoric. Hernandez’s presence on stage was undeniable, as he effortlessly captivated the audience’s attention.

Considering the level of production and unconventional energy of The Midnight, I wasn’t sure how their performance was going to translate to a live stage. I was surprised to see how well it turned out. During “Nocturnal,” McEwan was always animated and tireless on his drum pad. Lyle’s focus while meticulously plucking on his guitar was entrancing to watch during “Crystalline.” Hernandez’s crowd work, from coming close and teasing the audience, to actually wading through the sea of people during “Vampires,” there was never a dull moment.

A surprise addition to their musical lineup was the cover of Don Henley’s, “Boys of Summer,” which I thought was perfectly fitting. Lyle’s voice encompasses that feeling, pure and clean just like how our memories are when we look back on them. The song is already about reminiscing on days long gone and a summer love lost, fitting right in with The Midnight’s forte in that genre.

Going into the concert, I was wondering whether or not the band would include guest collaborators from some of their most popular songs. Fortunately, this was remedied by Nikki Flores, who made an appearance for her best known song with The Midnight. “Jason,” a song digging into the motivations and emotional difficulties of Jason Voorhees, the troubled Friday the 13th character. Flores’s voice has a calm power and emotiveness when she sings that lures in audience attention and makes them wish for more. It was a pleasure to see her perform at the show for one of my favorite songs from The Midnight.

As the show was coming to a close, Lyle and McEwan gave a heart to heart with the crowd, thanking them earnestly for getting them to The Observatory’s “big” room when six months ago they were performing in the smaller, Constellation Room. Lyle, joined by Flores on vocals, performed a harmonized rendition of a fan favorite song, and my personal favorite, “Los Angeles.” The song combined with the vocal harmony was incredible. The whole band including, Lyle, McEwan, Hernandez and Flores put their all into that song and it was truly something special.

The crowd was begging for an encore, and The Midnight delivered. They gave a very special double encore which, in my opinion, truly was the highlight of the show. Starting with a rendition of “Lost & Found,” Lyle stands alone, acoustic, performing in front of a quiet crowd, slowly crescendoing into singing unison. As the first verse ends, he’s joined by McEwan, who begins the percussion and synths for the bridge. As the bridge is in climax, Hernandez jumps on stage to replace the synth with sax. The crowd is intoxicated by the performance. Flores solos the second verse and is joined by Lyle for the second bridge. With the whole gang together, they perfectly mastered the entirety of the song.

“No we’re never as lost or as found as we think we are.”

The finale of the night was “Sunset,” a song about running away from old home towns into the adventures of the future, never looking back. A fitting title for the closing tune. McEwan kicked it off by doing some drum stick tricks, and accelerated the beat into high gear. Hearing the song made me feel as though I were cruising down a long empty highway, lined with fields in bloom, underneath a bright blue sky, aviators on, windows down, heading into whatever comes my way. The opening act, Violet Days, joined the stage to dance and party with The Midnight and the crowd. It was a great time and a great way to close the show.

My experience watching the The Midnight perform at the Observatory was an absolute pleasure. My biggest take away, which I think The Midnight wants all their fans to take away as well, is that we won’t live forever, and these are the days we’ll come back to in memory as the “good ol’ days.” That being said, as we continue to live in the present, let’s make it count and make it last.