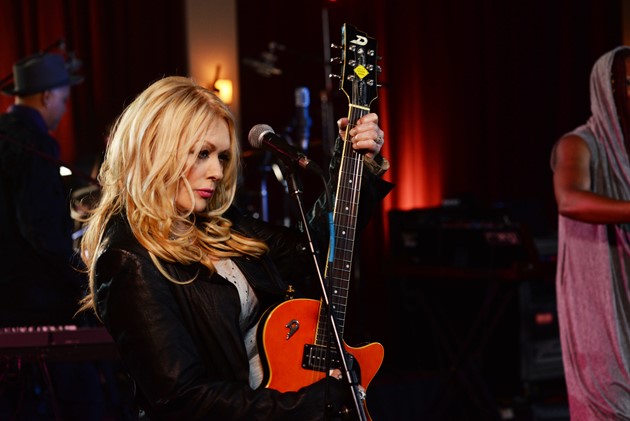 It’s been four long decades of rock ’n’ roll for Nancy Wilson, the iconic guitar virtuoso who formed the multi-platinum rock band, Heart, with her sister, Ann Wilson, in the late ‘60s, and has managed to keep the music pumping.

While watching Jimmy Fallon, Nancy first saw Liv Warfield, a former Prince collaborator, perform. She was immediately drawn to the power of her voice and her magnetic energy. She then contacted Warfield and got her to open for Nancy’s performance at the Hollywood Bowl.

“We just hit it off and just started talking about music and she was like, ‘I’d love to rock more. I love my soul and R&B stuff, but I loved to see you guys rock, and I want to rock more like that. Mind if I send you some ideas?’” Nancy said.

After that, the pair started exchanging ideas and pretty quickly, they all took a leap of faith and played together along with Nancy’s Heart band members and Warfield’s guitarist, Ryan Waters, for the first time. The next thing they knew they had completed an album, 2017’s First Things First, which fuses soul with arena rock for an entirely new sound.

Nancy’s grateful for the update. Though Warfield was hesitant to cover classic Heart songs like “Barracuda,” Nancy said it’s refreshing to hear her old songs take on new emotions and character.

“Don’t worry, just bring your own voice to it,” Nancy told Warfield.

Warfield took the advice and now performs an authentic version of the song that even leaves Nancy stunned.

“I pinch myself when she’s singing on stage because she has those ethics as a singer to never be a poser or a phony,” Nancy said.

It’s these ethics that Nancy has lived by as she continues to pave a way for female rockers. During an era when females in rock ’n’ roll were scare and looked down upon, Nancy carved a place for women to shine that’s still relevant in 2018.

“There’s always been an undercurrent in the women’s movement and a move towards equality and equal pay and all that kind of stuff that’s always been there, but to see it come more to the surface and to the front in the culture these days is really great,” Nancy said.

Nancy said she’s more than thrilled that the two acts will be paying homage to her as a preeminent icon of female rock.

In 2012, Nancy had the chance to play homage of her own to one of her biggest inspirations, Led Zeppelin. At the annual Kennedy Center Honors for the British hard-rock band, Nancy and Ann performed a cover of “Stairway to Heaven” that moved many to tears—most notably  Robert Plant. The video went viral and Nancy is still moved by Plant’s reaction to their performance.

Since then, Nancy and Ann have been working on their own projects, performances and tours. However, talks of an upcoming Heart tour have recently bubbled to the surface.

“You know, I can’t really give anything away exactly quite yet, but I’m excited and I think it looks very, very positive,” Nancy said.

But a Heart tour doesn’t mean the end of Roadcase Royale.

“I have so much joy playing with Roadcase Royale, my friends and my little rock family, and it just would be insanely sad if I could not continue to do that with them,” Nancy said.

What a performance featuring Heart and Roadcase Royale will look and sound like is still in the works, but with Nancy, Anne and Warfield all collaborating and creating together, it’ll continue to redefine rock ’n’ roll.

Until then, Nancy’s focused on her work with Roadcase Royale and excited to perform at KXMas. Talks of performing songs off of Heart’s Christmas album are in the air, but Nancy is certain that jingle bells will be involved.