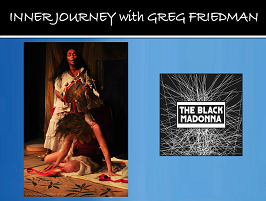 Greg welcomes Alessandra Belloni to Inner Journey.  Alessandra was born in Rome, baptized by her father in the Tiber, Alessandra was discovered as a child by legendary actress Anna Magnani and cast by Federico Fellini and later left Italy to become an artist and actress in New York City. Alessandra has been recognized internationally as an actress, author, composer, theater director, singer, dancer and a Remo sponsored percussionist. She has been guided since an early age by the Black Madonna — a form of the Virgin Mary representing Cybele, the ancient mother earth goddess – using the gift of clairvoyance received from her mother. Alessandra always had medianic powers and acutely feels the presence of spirits and ghosts. In Italy, she slept FOR YEARS in Lucretia’s Borgia bed, in her hunting reservation as a teenager.

Alesandra has just released a book and a cd called, “Healing Journeys with the Black Madonna”.