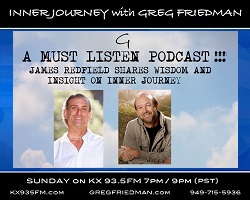 Inner Journey with Greg Friedman welcomes James Redfield. James grew up in a rural area near Birmingham, Alabama. As a young man, he studied Eastern philosophies, including Taoism and Zen, while majoring in sociology at Auburn University. He later received a Master’s degree in counseling and spent more than 15 years as a therapist to abused adolescents. During this time, he was drawn into the human potential movement and turned to it for theories about intuitions and psychic phenomena that would help his clients.

In 1989, he quit his job as a therapist to write full-time, synthesizing his interest in interactive psychology, Eastern and Western philosophies, science, futurism, ecology, history, and mysticism.
When Redfield self-published his first novel in 1992, the immediate interest from booksellers and readers made The Celestine Prophecy one of the most successful self-published books of all time. The novel was filmed as The Celestine Prophecy, which made its U.S. theatrical (Celestine Films) and DVD (Sony Pictures) release in 2006.