Inner Journey with Greg Friedman and Special Guests, the Crew from Woodstock 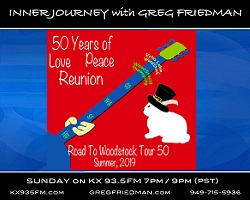 Inner Journey welcomes Normal Bean, Portia Lee and the Dobe Llama sharing their stories of Woodstock then and the Road to Woodstock tour going on now.

Riki Hendrix, Jimi’s cousin and Don Aters, one of the all-time great Rolling Stone Magazine photographer jumps in for the wild ride.

Woodstock was a music festival held on a dairy farm in the Catskill Mountains, northwest of City, which was held between August 15–18, 1969, which attracted an audience of more than 400,000.

Billed as “An Aquarian Exposition: 3 Days of Peace & Music”, it was held at Max Yasgur’s 600-acre dairy farm.

Over the sometimes rainy weekend, 32 acts performed outdoors.  It is widely regarded as a pivotal moment in popular music history, as well as the definitive nexus for the larger counterculture generation.