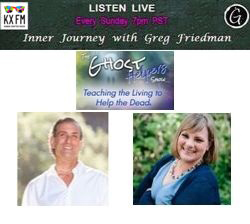 Greg welcomes Laura Van Tyne to Inner Journey.  Laura is a former public school teacher who was thrown into the deep end of the paranormal pool when one of her daughters starting seeing ghosts and once the word got out, her house was inundated with hundreds of spirits.  Laura searched high and low for some kind of guidance and along the way, she met Tina Erwin who she eventually formed a partnership with.  And together they co-hosted The Karmic Path Show and just began a new show, Ghost Helpers, because, at least according to Tina and Laura, the Paranormal is More Normal Than You Think!