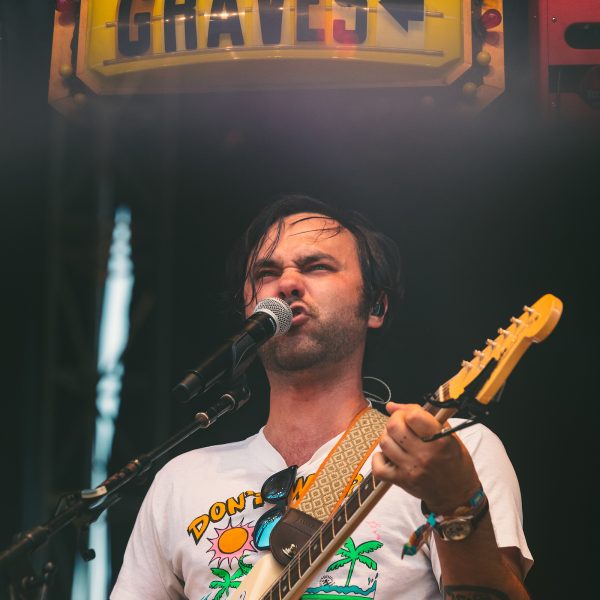 Take, for instance, if he should wait to eat until after the show or think about the entirety of his human existence.

Sitting in the media lounge of the Arroyo Seco Weekend festival, Rose-Garcia opted for the latter.

With no preshow ritual set in place, Rose-Garcia’s still figuring out the confusion of it all. Especially when it comes to defining what type of music he makes.

“I have a lot of trouble with genres. I’m bad at the elevator pitch. It used to be a lot easier to say I played something,” said Rose-Garcia.

But not knowing doesn’t scare him from asking even more questions on his new album, Can’t Wake Up.

“It’s about being introspective. It’s looking at your life like something that isn’t going to change unless you change it,” said Rose-Garcia.

But that’s a challenging feat for a world in which everyone is waiting for life to change itself.

“The album is a bunch of little vignettes of fantasies about your life changing and being hard on yourself for not changing,” said Rose-Garcia.

To Rose-Garica, everyone wants a reset in today’s world.

“Things are weird. There’s a lot of visual stimulus and a lot of emotional anger,” said Rose-Garcia.

Though he doesn’t have the answers, Rose-Garcia isn’t blinding himself to the ways of the world, especially when it comes to growing up.

The concept of becoming what you hated in youth is nothing new to Rose-Garcia, who believes the future generation always looks ridiculous to the past. It’s all part of life, and Rose-Garcia is concerned with more pressing matters.

Though he doesn’t know, he’s not afraid to ask.