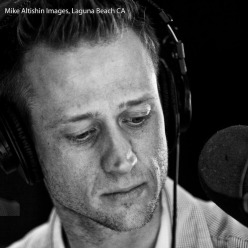 Brian was born and raised on the beaches of Orange County–Seal Beach, specifically. A graduate of Chapman University’s film school, he studied film with an interest in making music videos, but quickly realized that music & radio were his truest passions when he became deeply involved in college radio.  It was a 2009 spent living and working abroad in Australia, however, that galvanized his interest in bringing quality radio to the shores of Laguna Beach.

“I started listening to the radio with my parents as a child, and then as a teenager when most radio stations were being bought by big corporations at the end of the 90s.  Then I arrived in Sydney and remembered what it was like to hear quality radio programming with a mix of new artists and old favorites.”

Ever since KX FM 104.7 began in 2012, he’s worked with the station to help expose deserving artists on air–playing artists like Haim and Bastille long before they were in rotation at KX FM 104.7. Brian’s taste in music is hugely diverse.  As much as he grew up enamored with alternative rock, folk music, 80s hits and more, he’s also developed a strong side interest in electronic music and remixes.

You can can hear those tunes during Saturday night’s DEPARTURE, where he brings that side of his music library to KX FM 104.7’s airwaves.