Keeping it Old School with The Buttertones 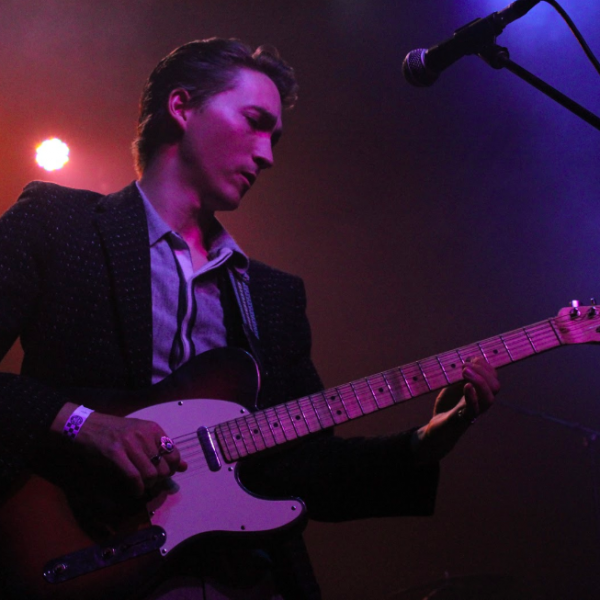 When The Buttertones take the stage, all eyes are on them. All five of the members have an individual vintage aesthetic that fits in perfectly with their nostalgic sound.

The five piece band creates a unique, rockabilly sound that combines quick, nostalgic beats with romantic lyrics reminiscent of the 1950’s. Each member of the band plays an essential piece in the puzzle of The Buttertones. They have an enormous fan base that extends across the country, but their biggest fan base is here in Southern California.

Their April 5th show at the Observatory was packed, with well-over a thousand fans in attendance. While fans cheered them on, The Buttertones went into their first song, “Delincuente,” a lesser known track off their 2016 album, American Brunch. While the band is fairly new, formed in 2012, they have a large library of releases and three studio albums.

Their fast-paced sounds work well with a live audience. The crowd starting rocking back and forth like a wave through every song, controlled by each beat the band played. This energy transferred between the crowd and The Buttertones for four of five songs, resulting in a symbiotic relationship where both sides were feeding off of one another. This energetic back and forth slowed down once the band reached “Baby Doll,” a slower romantic tune in their setlist.

A standout of the set was “Daks Back,” a song off of their 2015 album, American Brunch. The song was written by the lead singer, Richard Azaria, and references their guitarist, Dakota. The lyrics are over-the-top and describe Dakota to be a rough and tough rockabilly man straight out of The Outsiders. While many of their songs share a similar fast-paced, surf-rock sound, this song has fun guitar solos and a personal element to it that makes it enjoyable for the band to play.

Towards the end of the set, The Buttertones played their most popular song, “Orpheus Under the Influence,” off of their 2014 album. “Orpheus” has a very catchy pop baseline and changes between differing upbeat time signatures, making it easy for fans to dance and sing along to.

During their encore, The Buttertones came back with three last songs, the final one being a cover of  Ritchie Valens’s 1958 “La Bamba.”  The band’s drummer, Modeste “Cobi” Cobian sang and added a rougher punk element to the song. This classic hit was a great way to end the show as their cover energized the crowd and had everyone singing along to the well known song. By the end of their set, the crowd was still cheering their names and didn’t stop until they had to go home.