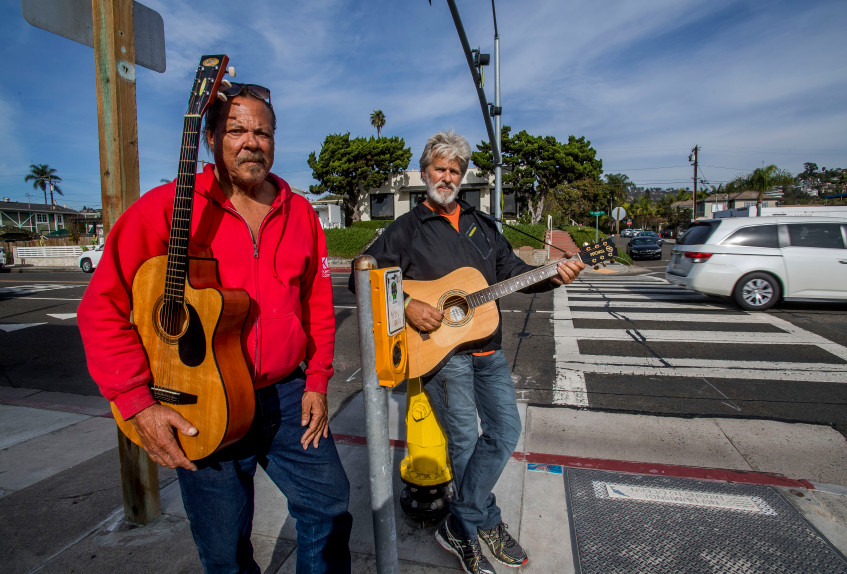 Many nights at the ASL emergency homeless shelter in Laguna Beach, Ed Shute and Emanuel Wood entertain themselves in the downtrodden surroundings by jamming on a pair of guitars. Both have been homeless off and on for years, struggling with substance abuse.

Small wonder they are good at playing the blues. But as baby boomers, they like their rock ‘n roll, too.

Shute, 57, knows lots of tunes by heart, but has to borrow an instrument from someone else. He couldn’t keep his own with him while out on the streets. Wood, 67, strums a fairly new guitar he bought in town so he could busk on a street corner. He also blows a mean harmonica.

Their audience never has been more than the several dozen homeless people at the shelter or passing tourists who might toss Wood a few dollars.

They’ll be the opening act Saturday night, Dec. 2, for headliners Eric Burdon and The Animals at a benefit concert presented by local FM radio station 93.5 KX. Shute and Wood could end up playing to as many as 2,000 people inside the Irvine Bowl, just down the way from the Laguna Canyon Road shelter where they sleep.

Billed as the “KXmas” concert, the show is an annual affair put on by the non-profit station to benefit local causes. But this is the first time homeless musicians have been invited to play, a fitting gesture when one of the recipients of the proceeds is Friendship Shelter, a longtime provider of homeless services in Laguna Beach.

The idea came from the staff at KX. Friendship Shelter, which operates the ASL shelter, helped to recruit Shute and Wood and the two men were eager to oblige. The show also will feature a performance by Joachim Cooder, who is expected to be joined on stage by his famous songwriter/guitarist father, Ry Cooder, for a few numbers.

Shute and Wood will play three songs along with Tommy Benson, a guitarist in his own right at 41. Benson plays live shows around Southern California and is the producer and host of the Guitar Gods Power Hour on KX, along with a jazz show.

The three sat together for the first time Tuesday in the sunny day room at Friendship Shelter’s downtown Laguna Beach resident program for homeless men and women, riffing on blues chords as they tested out songs they might play.

Neither Shute nor Wood had a career as a musician. But music has always played a big part in their lives, they say.

Shute taps the neck of his guitar as he rests it between his legs to replace a busted string: “This is the only thing right here that stopped me from doing some pretty radical things. Just picking it up and playing.”

When Shute launches into “The House of the Rising Sun,” a traditional folk tune The Animals rode to the top of the charts in the 1960s with an impassioned electric version, he explains how he first learned the song in fifth grade to play for a talent show. Took him about 30 listens to The Animals before he had it down, he said.

“My mother said just belt it out.”

Benson and Wood join in and Shute starts singing in a voice with a sandpaper edge, “It’s been the ruin of many a poor boy, and, God, I know, I’m one.”

For Shute and Wood, substance abuse has nearly been the ruin of them. They’ve gone through recovery and relapsed. But both are clean and sober now, they say. Shute says he kicked a heroin habit cold turkey and Wood has set aside the bottle to attend 12-step meetings. They’ve lost jobs, money and wives. Shute, who has three grown children, also spent time in jail.

“They’re popular guys and everybody wants them to be successful,” Price said, emerging from her office next to the day room where the guitarists spent about an hour jamming. “This is all about showing the humanity and the worthiness of these people that you just walk by.”

Wood likes to point out that he is a Laguna Beach native, a graduate of the local high school’s Class of ’66 — something he’s printed on the cardboard sign he props beside him when he plays his guitar at the corner of Forest Avenue and Coast Highway. “Local Musician,” the sign reads, “Born & Raised … Anything Helps.”
An athlete in high school, Wood once entertained the idea of becoming an oceanographer. Instead, he sold vitamins and supplements for a living. During the years when he did drugs and drank, he says he was never out on the streets until now.

He’s been sleeping at the emergency shelter for a year. His only income is about $750 a month in Social Security. He’d like to go back to work in a health food store.

Shute grew up in Huntington Beach, where his family moved from Inglewood after the Watts riot. He made a living as a truck driver and a carpenter. He partially blames his troubles on mental illness, but now takes medication for bipolar disease. He lives off of about $1,000 a month from a disability check and has been at the shelter since May.

Where he was once hair-trigger belligerent, Shute says he tries to find peace in being mindful and learning something from his situation.

“I see it as a lesson that’s being taught, to learn how to be content wherever I go.”

The KXmas show, in its fourth year, has featured Colin Hay of Men at Work, the Beach Boys (with Mike Love) and Kenny Loggins in the past. General manager Tyler Russell said the Christmas shows have raised more than $300,000 for local nonprofits that have included the Boys & Girls Club of Laguna Beach, Surfrider Foundation and Laguna Beach SchoolPower.

The non-profit radio station, with the tagline “Human Crafted Radio,” plays and introduces what it calls generational alt-rock and describes its mission as creating unity in the local community through music, arts and talk.

During an on-air interview with the station Wednesday morning, Animals lead singer Burdon learned from Russell that the homeless musicians will open Saturday’s show. Burdon seemed impressed. “Wow,” he said. “That sounds fantastic. That’s a good thing to be doing.”

But what will Shute and Wood play with Benson?

They tentatively decide on improvising lyrics to the Bo Diddley beat of “Not Fade Away,” Eric Clapton’s version of “Before You Accuse Me,” and a blues riff with the working title “My Amazon Friend.” Also during their time on stage, Benson plans to have Shute and Wood weave some talk about their lives into the music.

The two men are eager for their big moment.

Shute answers by bending some notes on his guitar.