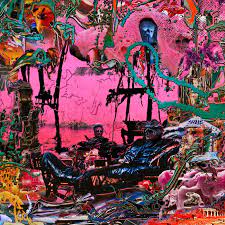 Hellfire, the third studio album by the British rock band, black midi, was released this July. Signed to Rough Trade Records, the four band members came together to record the album over a thirteen day period. Following the release of singles teasing the album, the band received great feedback from fans who heard songs like “Sugar/Tzu” live on their current tour, which ends in November.

Upon listening to this album, I noticed jazz, classic rock, and the most surprising, musical theatre elements. This album is like a haunted circus. A song that particularly alarmed me was “The Defence”.

Compared to other songs in the album, it is far more composed and calm. But, it is the lack of chaos in this song that is so eerie. Beginning with a serene, almost Hawaiian guitar melody, the song then transcends into an epic ballad including horns and steady drum. The character is essentially pleading for his life. Being a brothel owner, he knows that he is destined for hell but he tries so hard to defend himself, hence the song title. This song encompasses the harsh reality of realizing you can’t change your fate.

Hellfire is a perfect record for psychological horror fans looking for a new album in the upcoming Halloween season. Life is a cabaret, and the new black midi album encapsulates that.