Interview with Eliza & The Delusionals

Eliza and The Delusionals are an up-and-coming band from Australia who carry an alternative rock sound reminiscent of 90’s rock music. They are currently touring with the Silversun Pickups until the end of November. Eliza and Kurt, the lead singer and guitarist respectively, joined Avalon from KX FM for an interview before their show at the House Of Blues in Anaheim. 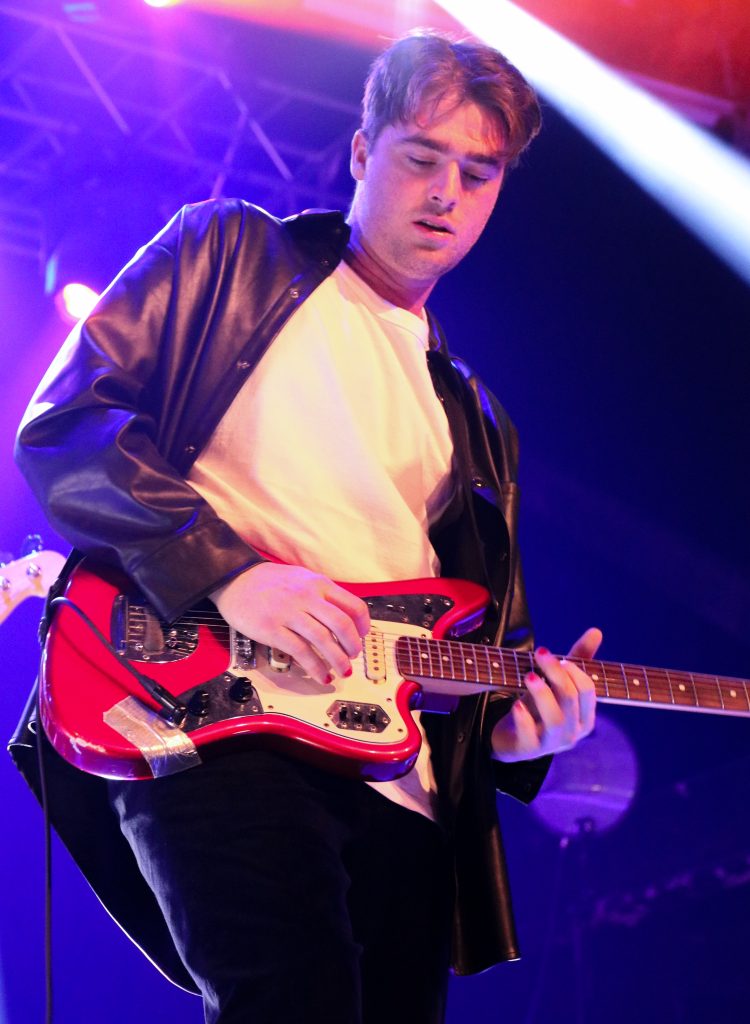 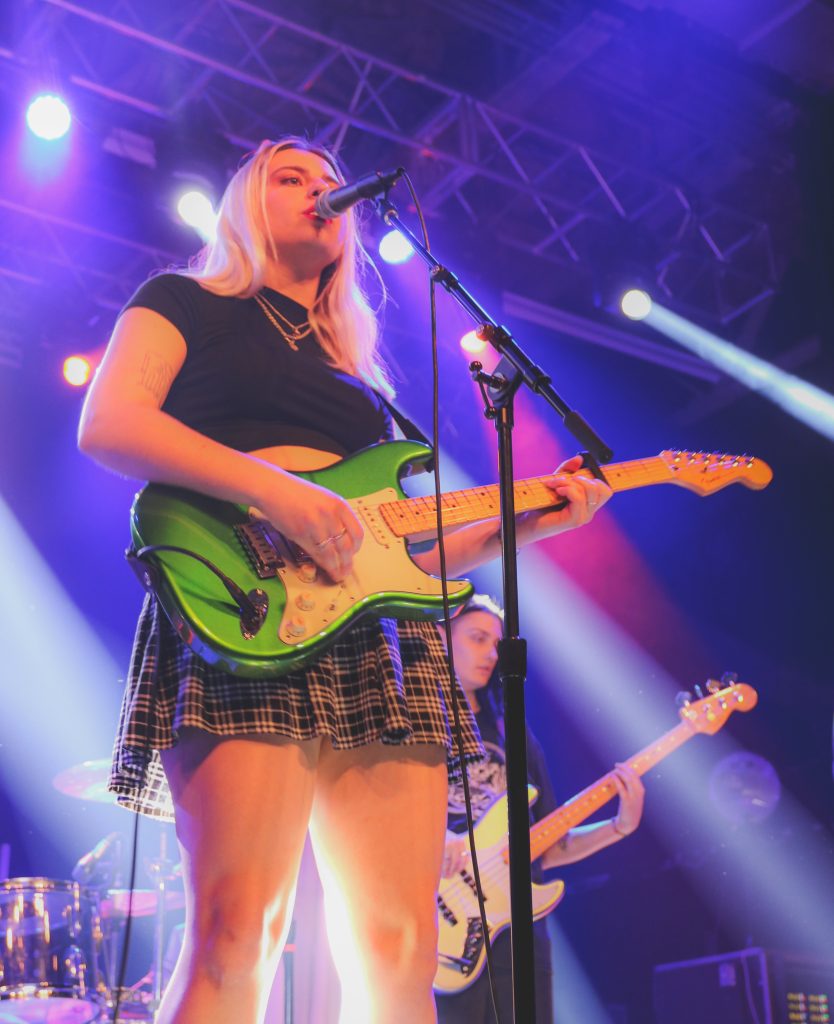 KX FM: Eliza and Kurt, since you guys have known each other since you were kids, what progressed your artistic partnership?

Kurt: I want to say I feel like we just always were like separately into different art forms and different like, I guess mediums you would call them or whatever, it wasn’t until our later teens, like eighteen or nineteen, that we came together and realized we were into the same sort of thing.

Eliza: And I think it’s a personality thing as well – just because so much about being in a band is like having matching personalities and being able to share a space this small with the same people all the time, so I think that was like a big part of it, as well. Just general love for being in the band.

KX FM: So you guys mentioned you were both separately into art, what mediums did you explore?

Eliza: I think for me like I’ve always been interested in art and drawing – it’s something that I’ve liked and Kurt has recently gotten into design, he designed these shirts actually (their merch).

Kurt: When you’re younger and stuff like that you do heaps of s***.

Eliza: Then you find something you really want to commit to, like we put so much time and effort into this, it’s the only reason it’s going anywhere. It’s cool to have the creative art side of it because Kurt took all the pictures for our new record like the album cover and stuff so it definitely helps when you want to like…

Kurt: Do things yourself.

Eliza: Yeah, and when you have a specific vision you don’t have to try and explain it to someone and not have them understand.

KX FM: When interviewing potential bandmates, what clicks for you?

Kurt: I wouldn’t say we interviewed anyone.

Eliza: We kind of just went on tour with them, and we were like if we can stand some form of touring and like we share the same humor, that’s a big thing for us.

Kurt: Because if you can’t stand staying in the same room as someone.

Kurt: I feel like it’s hard to find someone when you’re starting a band or in a new band, because there’s heaps of people playing guitar or drums and then finding the right person…it’s like being in a relationship with five different people.

Eliza: And that’s the thing, I feel like we always, or we always get the hired session drummers, we don’t have like a drummer in our band so we’ve always you know done one or two shows or like rehearsals to test the waters, and then just see how people…people act differently when they’re in their hometown to like when you’re far away. You know, on tour people can get like really tired, so I feel like it’s best to see how you feel with those people in those situations.

KX FM: What challenges did you guys face throughout lockdown that gave you a different perspective on your craft?

Kurt: I really hated being stuck.

Kurt: Because you were almost like forced at the time, and at least for us, like it was a really big thing for us. We had all these plans for tour, especially around here in the states, we had like 12-15 months of touring lined up.

Eliza: It was hard to cope with that, and also I think if that hadn’t happened we would’ve done the album that we did, and it’s had such great success at home.

Kurt: Also being comfortable being alone as well, because nobody really likes being alone, it’s f****** weird.

KX FM: Have you noticed any differences between the music scene in Australia and America?

Eliza: There’s just so much in the same like you know being on tour with these guys again because we were with them in 2020, and we all still hangout, and I know that’s something that not a lot of bands were doing in 2020, and it was like no-one talking to f****** anyone. The main band gets sick and the whole thing gets ruined, you know what I mean?

Eliza: Which we feel lucky that it’s like that, but you know it’s just very expensive compared to like um …  touring already is like for a band like us coming from so far away. It’s a really expensive deal but obviously we do it because it’s worth it and like since the pandemic, we’ve noticed for upcoming bands it’s a lot more expensive to go on tour.

Kurt: I know there’s a lot of younger artists doing things, and it’s a lot and that’s probably the biggest difference.

KX FM: What is your pre-show ritual?

Kurt: Heaps of these (motions to beer). Just kidding, we don’t really have one, we aren’t superstitious, actually we are superstitious.

Eliza: We kind of like do this thing where we all put our hands in and put them in and around and it doesn’t matter how many hands there are, that’s always fun. wWe like to just chill like this.

Kurt: We are all sort of just nervous, like everyone says they aren’t nervous but everyone inside is nervous. Until you play, it’s fine.

KX FM: What was your first concert?

KX FM: Did you go together?

Kurt: We’ve seen them so many times.

Eliza: Made me think like, I want to do that one day. That’s a goal, I don’t know if you’ve seen them live in concert but like, whether or not you’re a fan they’re so great live.

KX FM: Eliza, when did you discover your love for singing?

Eliza: I think for me like after I watched bands like Coldplay, the first instrument I played was bass, like I was right on playing bass – in high school I wanted to play bass. I did do singing lessons when I was a kid, never like theatre or anything like that, but yeah, I just sort of fell into singing and realized it’s just something I really enjoy. I think it all came together when I started writing songs. When I was younger and started writing songs, I realized wow I want to do this, and that’s why I like guitar as well, to  write songs. I don’t really consider myself a guitarist, but I can play the guitar to write songs.

Kurt: I’m classified as a guitarist but I still don’t call myself a guitarist. It’s actually so funny, like all the people I looked up to growing up, like when you play the same venues as them it’s really weird, I don’t feel like a musician. It’s major impostor syndrome.

Eliza: I think it’s because you can’t believe that you’re actually doing it, and you’re like why am I doing this.

Kurt: Eliza like first had a job at Subway when she was like 14 and like fucking listened to Silversun and then we found out we’re touring with them in 2020.

Eliza: It’s crazy, like I literally looked up to Nicki, like the bass player, so much, because she is like an unbelievable bass player, and especially back then like a young female you kind of want to have someone you can look up to and see yourself in in some way. There was not, there definitely is more  representation now, but back then it was like oh my god she’s a female bass player, in like a heavy band that’s so freakin cool! I think you sort of just fall where you are meant to be. I think even Kurt and I, reconnecting as friends and songwriters and everything, being in a band together, it’s just sort of like things happen for a reason in a way as much as the pandemic was f*****, we wouldn’t have had the time to write the album that we did. That’s how I cope with everything.

KX FM: If you could collaborate with any artist, dead or alive, who would it be and why?

Eliza: We love The 1975, as well. They would be great to collaborate with… so many the list could go on, Jack Antonoff.

Kurt: You surely would have to say someone like Prince as well.

KX FM: My favorite song of yours is “Halloween,” what are you going to be for Halloween?

Eliza: We are playing on the 30th but we’ve talked about dressing up.

Kurt: Is that acceptable to dress up the day before?

Eliza: People have already decorated their houses, I didn’t know it was a thing there. We were driving through the suburbs and there were like these giant Halloween decorations, and we were like oh my god these people really go all out, but I don’t know what we are going to do. We will probably go and find something from the dollar tree. I think we should dress up as Star Wars.

Once Eliza and the Delusionals performed, the band killed it on stage. Their stage presence blew me away. The way they all communicated through the music and dance was so spectacular to watch. Eliza’s voice is captivating, and it sounds so similar to their recorded work. She made herself known on that stage with her sound. For some songs, she would play the guitar, as well. It’s hard to pick an artist to focus on in the band because they are all so dynamic on stage – it feels like it’s where they’re meant to be. My favorite song performed was “Swimming Pool.” The lighting matched the song perfectly. If you happen to be following the Silversun Pickups on their tour, you will be rocking your socks off with the openers, Eliza and the Delusionals. 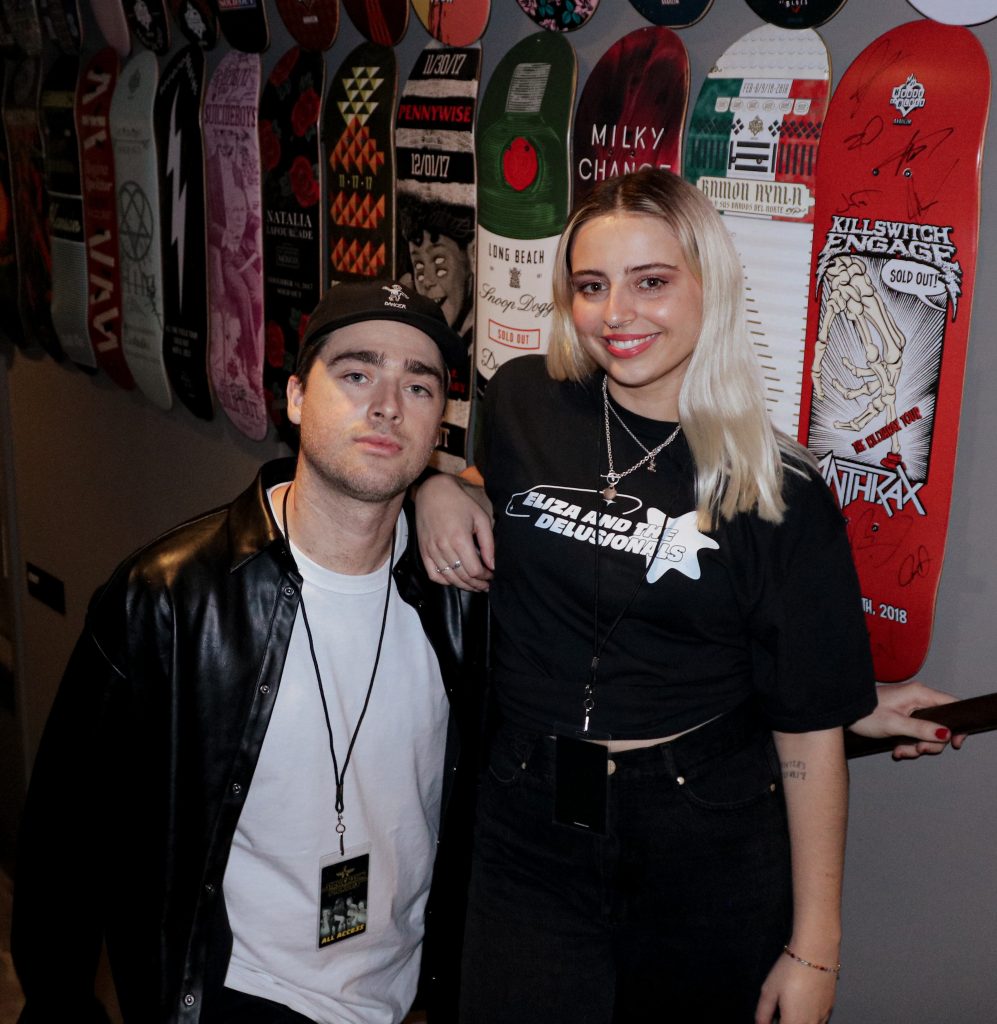 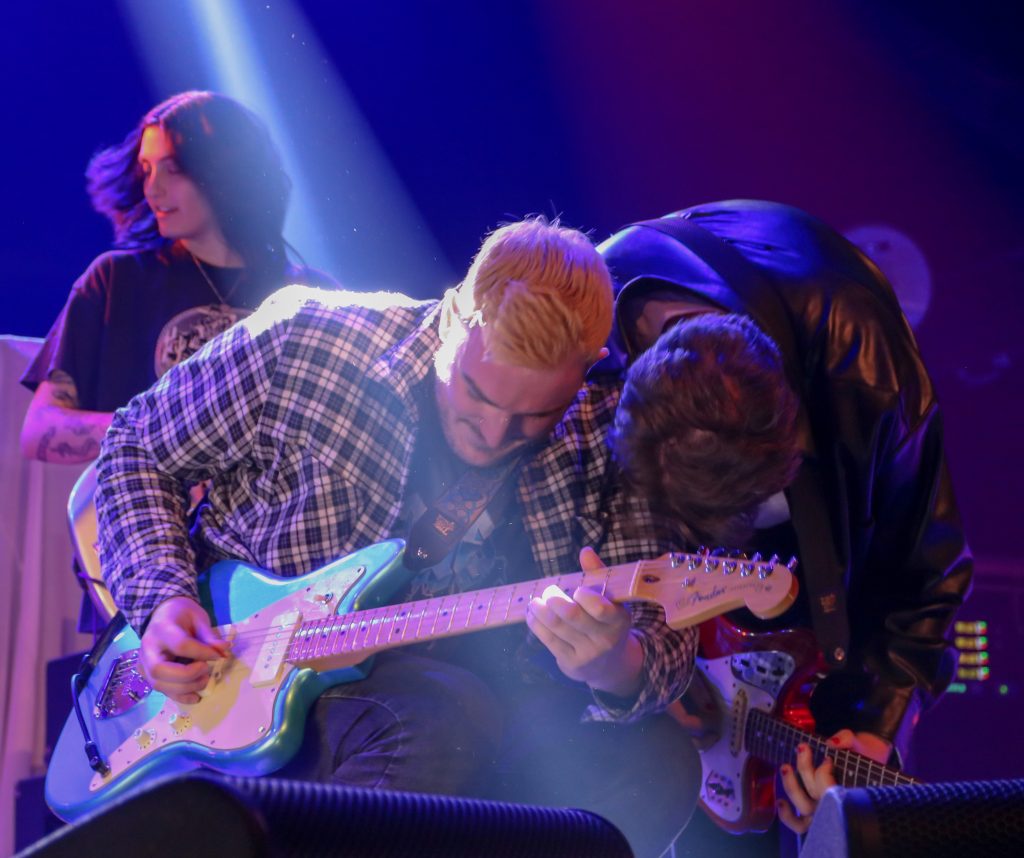