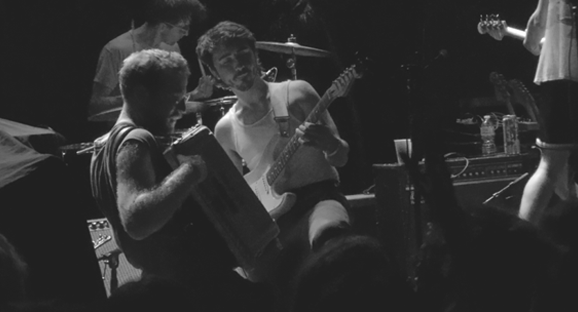 An intimidating line of teenagers in streetwear, sporting tracksuits and rare sneakers, curved around Santa Ana’s The Observatory, slowly moving through security as they removed cellphones and forgotten chains from their pockets, staring at a group of teens in Hawaiian shirts as they bypassed the line for security and entered the venue with no hesitation.

The group of teens flowed into the already half-full Constellation Room, a hidden venue-within-a-venue, where rapper Ski Mask the Slum God, who was performing in the larger room, could be heard through the walls. The teens didn’t seem to care, or for that matter notice; they were too busy watching as members of The Symposium, a four-piece indie rock band, walked onto stage all smiles, as though the night was an inside joke.

After promising not to infringe on Kid Rock’s territory with their song “Cowboy” and labeling their more psychedelic sounding sounds as “synth shit,” it’s clear the Chicago band has skipped the pretension for a playful self-awareness. The music sounds retro, but the feeling’s not: a fuzzy mixture of youth and energy that seeks to be lost in.

As The Symposium left the stage, that energy remained in the audience mostly under twenty, who checked their phones and counted how many hours they had left until curfew. Phones disappeared into pockets as Hot Flash Heat Wave made their way onto the stage, dressed in full summer gear. After a few back-and-forth dialogues with the audio technicians, the band from Northern California finally began to relax, settling into the SoCal environment, joined by two miniature palm trees on stage.

“Should we play a show now? Is sound-check over?” a band member asked the audience as they let their anxieties slip away.

The result of the garage rock the band is founded on and the dreamy atmosphere of the West Coast, Hot Flash Heat Wave never loses the melody. After a brief stint with a maraca, an accordion solo and a guitar versus accordion showdown, it’s clear the band is pushing the boundaries of what pop music should sound like, while maintaining the creative spirit that led them to the genre in the first place.

The audience returned to their chatter, picking up where they left old conversations, counting down the minutes until the “coral-reef rock” band, a modern take on bossa nova and oldies, took the stage. As two LED palm trees lit up on stage, the group of teens in Hawaiian shirts screamed, for where palm trees are, Summer Salt isn’t far behind.

Though Austin natives, the band quickly settled into things, creating a hypnotizing groove as relaxing as the vocals of frontman, Matthew Terry. Each song rolled into the next, from powerful guitar riffs to emotionally charged lyrics, pleas for relaxation to thankfulness for the now, from remembering life’s sweetest moments to the pain of heartbreak. Fans cheered as they recognized familiar bass lines, mouthing the lyrics as they swayed along to the music, closing their eyes and disappearing for just a moment to a deserted beach of endless summer, where most Summer Salt music tends to take the listener.

“If you’re wearing a Hawaiian shirt, this one is for you,” said a band member to cheers from those dressed in shirts covered with Polynesian motifs.

It’s not the only acknowledgment Summer Salt made to their dedicated fans, announcing the release of a new album following the completion of their tour before performing fan-favorite, “Tidal Waves.” It’s the closing track of the band’s 2015 release, Driving to Hawaii, which garnered the band a considerable amount of attention and continues to define the breezy, smooth energy Summer Salt delights in.

But no one enjoys Summer Salt’s music as much as their fans, who yelled out song requests new and old, if not the entirety of their discography. Though most of their requests were fulfilled by the end of the night, some fans seem to know more about Summer Salt than they do themselves.

“I’m in the band and I don’t even know that song,” said a guitarist as he turned to fellow bandmates in confusion at a request to play “Little Legs” before facing the audience, whose Hawaiian shirts clung to their sweaty limbs, and laughing along with them.