Hidden Gem: The End of Comedy by Drugdealer 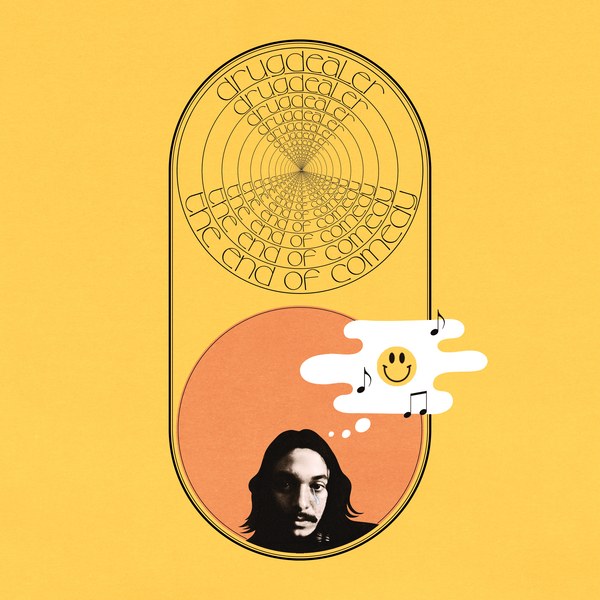 We live in a world of endless comedy, one in which—all jokes aside—L.A. based musician, Drugdealer, is trading acid trips for real life. It’s been a longtime coming for Michael Collins, the man with many monikers, known as Run DMT, Salvia Plath and half of Silk Rhodes. But with Drugdealer, Collins is here to stay. With his 2016 release, The End of Comedy, Collins’s letting go of the illusions, no longer hiding behind humor or psychedelic drugs, but living in the real world.

But in order to begin again, Collins had to move on from the past. Saying goodbye to the ambient synth of Run DMT and the 60s pop of Salvia Plath, as Drugdealer, Collins has found something new. He’s ditched complicated arrangements and convoluted themes for a more laid-back approach, leaving vocal melodies as bare as possible, often backed by only piano or guitar, the words speaking for themselves. But Collins doesn’t lose his psychedelic approach, nor stray from his 70s singer-songwriter influences. Instead, he focuses his inspirations into a relaxed soundtrack full of sincerity.

Playing director, Collins casted a number of admirable musicians to appear throughout the 11-track album. From Ariel Pink’s creativity to Weyes Blood’s soulful voice, Collins enlisted collaborators he could make the most with, pushing himself to new realizations and vulnerabilities. He steps out of the spotlight, letting his collaborators shine while he creates complementary instrumentation. But he also knows when to speak for himself, to leave his friends out. Though not as charming as his work with his guests, it’s where we really hear Drugdealer’s sound and see Collin’s masterful control. The result is a lively flowing track of songs, uncomplicated and teeming with possibility.

That sense of possibility is The End of Comedy’s heart, and perhaps, humor’s antidote. Because to Collins, humor has become a defense mechanism, a means of sweeping away life’s hardships, and without it, the future’s unpredictable. But that’s not anything to run away from, and we hear Collins having to remind himself not to escape when the going gets tough throughout the thirty-one minute album. “Everywhere I look/There’s more reasons to be feeling free/But still I have to keep myself from leaving,” Collins admits on “The Real World.”

But it’s not all smiles. We hear sadness creep in as Collins puts an end to humor in the album’s instrumental “theme” tracks, which touch on the melancholic nature of life with dreamy string arrangements and a bit of jazz. It isn’t until “Sea of Nothing,” that Collins finds the words to the truth he’s been searching for. “Try to sleep/But the thought of what you were missing meets you/Get so deep/On the shallowest of worry thinking,” Collins confesses, going deeper instead of running away, having found the answers within himself.

Some answers, though, Collins only found through a little help from his friends. Breezy in energy and acoustics, “Easy to Forget” is the meeting of the waters for his and Ariel Pink’s artistic flow, fostered by the pair’s friendship. “I traded all my doubt for you,” Pink cheerily delivers after a series of “la-las,” reflecting his and Collins’s creative process unhindered by insecurity or doubt, each musician bouncing off the other’s curiosity.

For an album about comedy’s end, it’s fitting that it ends ironically: with a drawn out, overly obnoxious laugh. But it’s not laughing it all off, everything Collins has fought so hard to face. The laugh is an acceptance of the real world, of the humor that cannot be escaped from, that must be accepted for the truth it hides and reveals. Because the laughter’s last few notes is slowed into a sigh which morphs into a scream ended only by silence; the epitome of human existence. It’s the end of comedy and the beginning of Drugdealer.