KOLARS brings a punchy energy to The Wayfarer 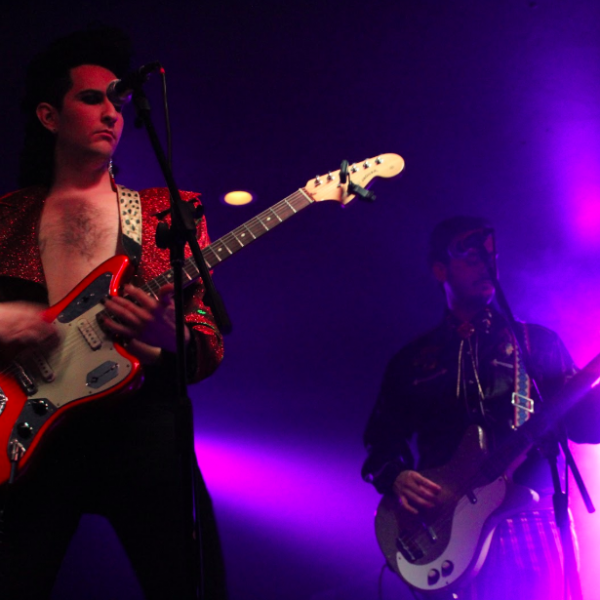 The Wayfarer crowd murmured and rocked back and forth on their feet, anxiously awaiting the upcoming performances. It was unclear how many people were there for the show, and how many were just there for the drinks. The atmosphere was calm and organized beforehand, but that changed when Tokyo Lucky Hole took the stage.

A large crowd formed around the stage as glamour and mystique hung in the air. It immediately became apparent that everyone was their to see TLH do their thing. The blue lights reflected off Clay Fuller’s, (the leader singer of TLH) sequin jacket. After thanking the audience, TLH jumped right into their biggest single, Mr. McQueen (Directed by Clay Fuller’s brother, Blaine Fuller). The tongue-in-cheek lyrics and catchy guitar riffs excited the audience, as they drew in an extensive audience, even dragging the last few stragglers away from the bar. TLH flowed seamlessly from one song to the next, without anything sounding out of place.

After playing a few originals, TLH dove into a familiar tune, Boogie Shoes, by KC and The Sunshine Band, which lit up the room with disco fever. Even through their layers of allure and glamour, TLH proved themselves to be talented and entertaining performers who can hold their own with the best of the best.

Alex Lily was the second to perform. Her stripped down setup and stage presence conflicted with the heavy glamour and rock star attitudes of Tokyo Lucky Hole, but felt like a breath of fresh air amongst the midst of it all. Lily performed several songs, including the title track off her latest album “2% Milk.” Her harmonies and croons melted over the audience like smooth butter. Tokyo Lucky Hole is a hard act to follow, but Lily did it with ease. Her voice and set was reminiscent of Norah Jones, but with refreshing instrumentals and an interesting accompaniment. While Alex Lily was the most relaxing and down-to-earth set of the night, she was the perfect act to listen and sway to between Tokyo Lucky Hole and KOLARS.

KOLARS took to the stage with an unusual set-up. Most people have probably never seen drums set-up in the same way that Lauren Brown, the lead drummer, has them. The suspense of the impending show drew the crowd to the stage, and the energy in the room shifted into awe and amazement, as KOLARS (literally) jumped right into their set. Brown smashed the drums enthusiastically, all while keeping the time for Rob Kolar, the lead singer, with the drum beneath her feet.

They played a set full of punchy, drum driven rock songs that demand your attention. After three originals, KOLARS gave a whole new meaning to the song, “Teenage Kicks” with an updated rendition of the classic punk song. KOLARS stayed high energy throughout their whole performance, refusing to waiver or compromise anything, even when Brown had jumped and kicked her way through ten songs. Their intense and focused energy spread throughout the crowd and lit-up the audience energy.

KOLARS ended their set with one of their most popular songs, One More Thrill, an honest yet catchy song that left the audience clapping along to the catchy drum beats and reverb-filled guitar chords. After the crowd seemingly couldn’t get enough, KOLARS performed an encore of their new single, “Dangerous” to an enthusiastic crowd.

Each band that played that night had a distinct sound and unique approach to performance. While each set was vastly different from the last, they all found common ground as talented, entertaining, and exceptional performers.