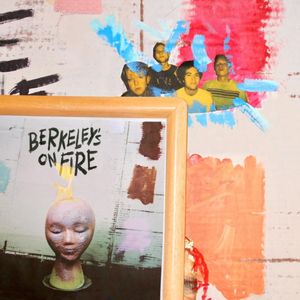 If there’s one thing to be said about SWMRS, it’s that they’ve got an abundance of punk spirit. Their fourth album, Berkeley’s on Fire, is brimming with energy. In comparison with their last album, Drive North, which was wrought with teenage angst, Berkeley’s on Fire breaks away back to classic punk roots giving grievances towards society and personal trials with catchy music that sticks like sap to a tree.

Fronted by brothers Cole and Max Becker on guitar and main vocals, Joey Armstrong on percussion and Seb Mueller on bass, the Oakland based quartet takes the spirit of punk past and charges forward with a sound that’s all their own. Strident, and gritty. Tender and youthful. Maniacal in the best way possible.

Released this past February, the ten song album examines a lot of personal topics to the band and their struggles with contemporary society. Being Oakland locals, the album’s titular track, “Berkeley’s on Fire,” discusses desensitizing to chaos, referencing riots at The University of California Berkeley and being fed up with modern news media. As Becker puts it: “TV news is bad for you, And bad TV is news for you.” When listening to the song, I see crowds of rambunctious college kids jumping in synch wearing bandanas around their face and carrying pickett signs with SWMRS leading the way. The song’s vibe and lyrics are in your face and unapologetic. With rhythmic drums, rebellious lyrics, simple guitar riffs, and wild vocals, the track sounds like it could’ve popped off of a Clash album.

The second track, “Too Much Coffee” goes into Becker’s anxieties about touring and his life changing too quickly. Becker touches on something I think we all can relate to: Sometimes life can seemingly move so quick it can be overwhelming and alienating. This feeling is punctuated by Becker when he sings about walking alone down South Congress in Austin, Texas, not having eaten breakfast and having drank too much coffee. I picture listening to this song while driving through a cloudy day at the beach, and I’ve got troubles, but this track would pick me up. Becker won’t be kept down by his struggles. He’ll defy the odds and his own feelings to succeed and this song makes me feel like I should do the same. I won’t be kept down by my struggles either.

SWMRS say “good riddance” to toxic relationships in their third track, “Trashbag Baby.” Listening through the door, a friend is heard dumping her lover over the phone. The friend is done being a trash bag, gathering all of the toxicity and having baggage dumped on her. The song is high energy, unapologetic and sounds like the perfect soundtrack to the breakup. It’s brutal and fun. I never thought I’d be dancing around and nodding my head to the beat of a broken heart.

The energy keeps going with the bellicose fourth track, “Lose Lose Lose.” The song sounds like it could be the score to the taking of a city or a civil uprising that won’t be kept down. The drums are fast and meaty, and the guitar is heavier, at times reminding me of the guitar riffs from James Bond movies. There are a bunch of references to the Symbionese Liberation Army, an America-based, militant organization active in the 70’s headed by Donald DeFreeze and Patricia Soltysik who is referenced in the song. Their motto, “Death to the fascist insect that preys upon the life of the people!” is referenced in the song too, adding to the track’s vibe.

“April in Houston,” the fifth track, calms down the vibe of the album, heading in an introspective direction. What makes a good friend? “Those who stick with you during your struggles,” answers SWMRS in the lyrics, “Everybody wants to get me high. But where will they go when I’m low?” The upbeat drums combined with the charming sound of the guitar and the poignantly genuine lyrics unify into this really bittersweet sound that stuck with me after I listened.

“Lonely Ghosts” is one of my least favorite songs on the album. I have an affinity for songs that really nail down an emotion or energy and this song just didn’t do it for me. The song does not convey much emotion, reflecting just how uncomfortable Becker feels in places that are typically thought of as fun. Becker sings about being glued to his phone and “feeling antisocial, misanthropic all around, just fucking over being anyone at all.” That energy, the edgy lyrics, amalgamated with basic instrumentals, and simple drums conveys the feeling of being misplaced, but made me feel more uncomfortable. I can see where they were going, but it just didn’t succeed.

SWMRS hit a personal sweet spot of mine with “IKEA Date.” This song hits just the right mix of nostalgia and loneliness, two emotions that pair really well. After a lover suddenly leaves, the singer reminisces on their days messing around in IKEA, playing house. Whereas his house used to be warm with his lover next to him, the bed is cold and he can’t sleep. He is alone wondering where his lover went and how he’ll ever sleep again without them. It gives me this sad feeling in the pit of my stomach, like I’m watching Lily and Marshall from How I Met Your Mother breakup or, in a more serious example, like someone I care for deeply is in distress and there’s nothing I can do. The song is melancholic to say the least.

The album takes a turn for the hectic with “Hellboy.” Right out of the gate we get some heavy, high octane guitar with thick drums that makes me wish I was in a mosh pit, and the lyrics, “Charlie Manson is alright.” Definitely controversial, but not condoning. SWMRS use this in comparison with groups that cause atrocities and don’t take blame. You can hear the SWMRS’ frustration with society, as Becker just screams during one of the interludes.

The last two songs weren’t the conclusion this album should’ve gotten. Neither of these songs have that punk energy the SWMRS are known for and don’t punctuate the album at all. The penultimate track, “Bad Allergies” is a cute song about how the singer has bad allergies and if you want to be with them, they’re sorry, but you’ll have to deal with it. (But they hope it doesn’t bother you.) That’s it. No big theme. It’s a calm way to start wrapping up the album.

Concluding the album is, “Steve Got Robbed,” detailing the story of how a man named Steve got robbed after a show in San Francisco at gunpoint at the West Oakland Bart Station. It’s a laid back song with some loose drums, and industrial, urban sounding guitar. The song’s greater point is that “the system” and “the man” are taking what’s rightfully the people’s, but can’t take away their spirit, hope and dedication. So in this sense, Steve has been robbed twice in one night. It’s an interesting sounding song but could’ve been rearranged with some other tracks to end the album in a more meaningful way.

The album struggles with its lack of focus. Songs jump from political statements to personal tales of stress and struggling love. The balance struck between the two feels like it’s standing in the middle of a highwire. The balance is there, not leaning too hard in one direction, but it’s close to tipping over. Their political tint is fitting for today’s climate which responds to and reacts to edgy statements, but in SWMRS case, it felt cynical and off-handed, just there for the sake of reaction. If there was a touch more focus, like grouping songs together or focusing more on the introspection, I think the album could’ve been improved. The introspection and punk energy are what make the album and by proxy the SWMRS shine.

On the flipside, their more personal and inwardly focused songs really hit home. A larger body of SWMR’s appeal is in their ability to relate what it’s like being young in our present day. “Too Much Coffee’s” stress on the future , “Trashbag Baby’s” dealing with toxicity, “April in Houston’s” forcing yourself to be happy to keep friends around, and “IKEA Date’s” dealing with love lost while being young. Despite having different sounds, the album conveyed SWMRS’ emotion with strength and sincerity, a strength of the band.

Running at thirty-three minutes, Berkeley’s on Fire is a fun venture from SWMRS’ typical brand of music. More stylistic and higher quality, this is a moment of growth for the band. Although the album is a little unorganized, the energy of the album is good with catchy songs that would make it more appealing to their audience. Their variety of themes from being fed up with society’s novelty, and personal tales of love and life strike a very fine balance that is so close to working. Regardless, it’s an entertaining and high energy album that showcases SWMRS’ unique sound and solidifies their spot on the playing field. Berkeley’s on Fire can be summed up best by Becker in “Too Much Coffee:” “I got everything it takes so, Don’t tell me how to sing this song, Don’t try to tell me how.”