Slowing Down and Chilling Out with Wild Nothing 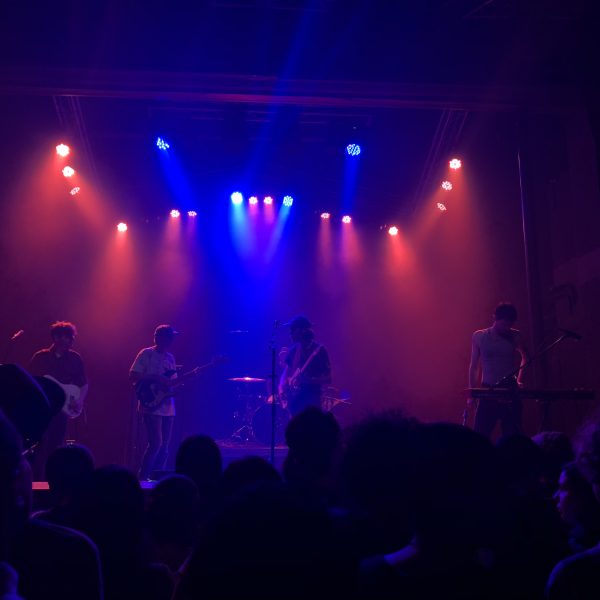 “You wanna know me, well, what’s to know?” asked Jack Tatum, otherwise know as Wild Nothing, the indie pop musical project he started recording under in 2009, releasing promising demos which turned into EPs and then albums, the most recent of which, Indigo, attempts to answer Tatum’s question.

It’s a question Tatum first asked himself in 2012’s Nocturne, an album which garnered him both critical and commercial success, defining a new, polished voice in the indie pop realm. Yet, with Wild Nothing, Tatum continuously expands on sound and influence, experimenting with writing and production, mixing elements of indie rock and dream pop into something else. This something else, difficult to describe without referring to the serene mood it evokes, is what draws listeners to Wild Nothing.

It’s also what drew fans to The Santa Ana Observatory on a night in late October, filling the pit and balcony, all in attendance slipping into a relaxed mood encouraged by faded blue lighting. But excitement found its way across the venue as the lights shifted to a red hue and indie-dance band, Men I Trust, walked onto stage. Hailing from Montreal, Québec, the dream pop trio was meet by cheers before they even picked up their instruments. They thanked the audience and immediately dove into their dreamy, mesmerizing sound, seemingly effortless and incredibly groovy. The Canadian outfit played tracks new and old, showing off their musical versatility as they transitioned between R&B-heavy inspired tracks, to the stripped-down “Show Me How.” As they left the stage and the flood lights turned on, the audience suddenly awoke from the trance-like state the ethereal band had walked them into.

“It’s over?” a concertgoer asked aloud.

Not for long as Wild Nothing made their way onto stage, comprised of Tatum and his touring band. Immediately jumping into “Nocturne,” the band grooved back and forth with their guitars, dancing in streaks of light, their faces smiling with content at the crowd of swaying bodies below. The band held nothing back, moving from track to track, maintaining an energy as exciting as the 80s-influenced synth-pop most of the songs off Indigo fall under.

Halfway through their set, Tatum adjusted the microphone and stared into the audience, assessing their energy, which was higher than expected as concertgoers shouted out song requests, compliments and questions, one of which Tatum answered. The question came from the back, inquiring what mystery drink Tatum was sipping between songs.

“It’s throat cold tea if you really most know,” Tatum replied to laughter from the crowd.

Wild Nothing then slowed things down with “Shallow Water,” a carefully arranged and cleanly produced track that reveals just how far Tatum has come as a musician, while maintaining the distinctive spirit that has set him apart since his very first demos. Nearing the end of their set, Wild Nothing surprised the audience with fan-favorite, “Chinatown,” beginning a three-song encore that had the crowd dancing and cheering throughout. They ended the night with “Shadow,” a warm melodic song about a negative relationship and heartbreak. Played live, the song transformed into a chance for reflection, to slip away into the calm energy of Wild Nothing and take a breath.