Spirit of the Beehive – “Entertainment, Death” 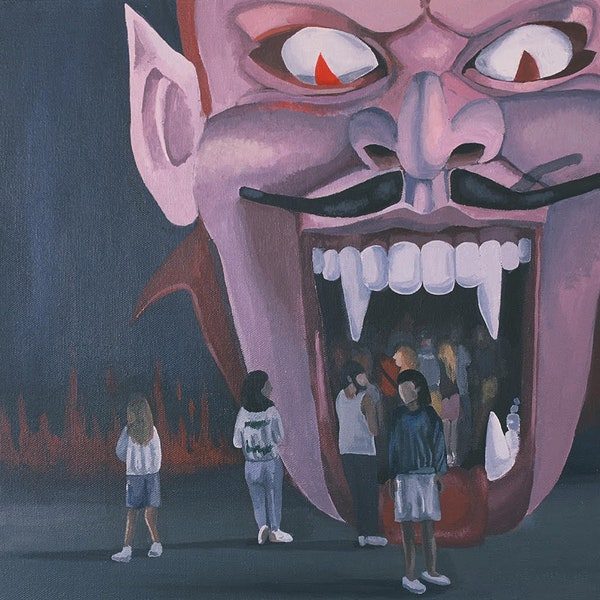 Philadelphia-based band Spirit of the Beehive’s newest album “Entertainment, Death” is a glitched out odyssey.

Their first project as a three-piece, this LP marks a departure from the band’s typical sound into something much more experimental.

Spirit of the Beehive is a band that has always pushed beyond the boundaries of the Philadelphia sound. The band has been crafting songs since 2014, making a name for themselves among contemporaries like Alex G and Palm. There isn’t a single genre you could use to describe Spirit of the Beehive; their online bios show tags ranging from psychedelic rock to noise pop, and the descriptors change every album. Their 2014 debut is described as “midwest emo” while 2018’s Hypnic Jerks has been dubbed “bedroom pop.” Their sound is constantly evolving and this new album is no exception.

Their debut on the renowned indie label Saddle Creek, “Entertainment, Death” is a reaffirmation of this band’s commitment to change. Gaining a wider fan base since their last album, the band found an opportunity to reach a larger audience. To mark the release of their new album, they debuted the lead single “THERE’S NOTHING YOU CAN’T DO,” a track punctuated by distortion, samples of old TV commercials, and a heavy-metal breakdown. The center of the song, however is marked by driving drums and guitars layered over by synths and other effects. This is a constant theme of the album: moments of clarity surrounded by chaos.

The recording of this album lends to its distorted sound. As the band created this album remotely over several months, they had the opportunity to get creative in a way that they couldn’t with their previous albums. Once it was mixed digitally, they mastered it to tape, adding a unique texture to the already experimental sound. This leaves it sounding a bit cluttered at times, but the band makes up for this with the originality of their songwriting. No two songs on this album sound the same. The moods in the songs change sporadically. One moment of standard indie rock is followed by a barrage of electronic glitches and feedback. Guitarist and singer Zach Schwartz described his songwriting process as “stream-of-consciousness,” and this truly shows throughout the album.

On the surface, “Entertainment, Death” is a storm of sound punctuated by extended passages of dream pop and experimental rock. The songs on this album are surrounded by a fuzz of feedback, digital glitches, and samples of old TV commercials. The album opens with what sounds like the destruction of a drum set by space lasers that eventually fades into the blissed-out intro of “ENTERTAINMENT,” a solemn interlude strings and guitars.

Each following track fades into the next, making the album seem like one long piece rather than a collection of songs. Despite this, each track has its own distinct mood and feel. The track “WRONG CIRCLE” is ethereal and refined, fading in from the previous track smoothly. “GIVE UP YOUR LIFE” sounds like a remix of a slacker rock tune in the style of Pavement, while “THE SERVER IS IMMERSED” features the fuzzed out guitars and drums of a typical shoegaze song.

It is difficult to assign a single description to any song on the album as they all change so rapidly. Searching between the droves of fuzz and noise, there are several moments of indie-rock perfection. “WAKE UP (IN ROTATION)” is a beachy jam with shimmering guitars and bleached-out synths. “IT MIGHT TAKE SOME TIME” is an exploration of dream pop, marked by tender vocals and catchy guitar lines.

There is no single way to describe Spirit of the Beehive’s “Entertainment, Death.” The album presents many sounds all at once, and at times it can be overwhelming. Many of the tracks feel less like songs and more like brief ideas, strung together in a web of noise. Despite the hectic nature of the album, the band manages to present a collection of interesting and original indie rock songs. Although this album might take some time to fully pick apart, it’s worth seeking out the moments where the band is able to shine.