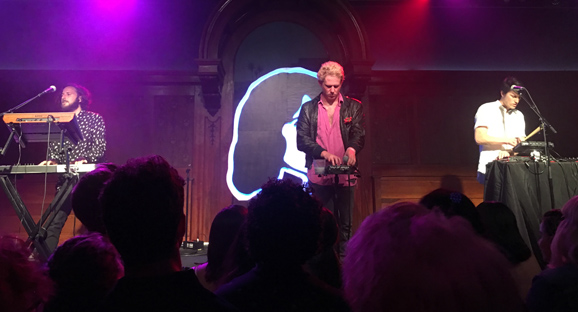 “I don’t care if I die of heatstroke up here. This is rock and roll,” said Brad Petering, lead singer of TV Girl, refusing to take off his leather jacket as he stood in the heat emitted from blindingly bright stage lights overhead. Instead, the frontman took a swig of alcohol and went on to sing of modern romance, heartbreak and “luv.”

After a month of touring, Los Angeles based band, TV Girl, ended their West Coast Tour with a sold-out show at the Lodge Room in Highland Park. A bittersweet show, the hypnotic pop band could hardly believe the long sweaty nights of music playing were over, but were more than happy to be home – literally.

“I live right up the street,” said Petering, who had spent the past few days in his “self-care cave.”

But TV Girl wasn’t the only one glad to be back in L.A.

Hailing from Eagle Rock, Ashley Rhodus, otherwise known as Wished Bone, played her last show opening for the band. With only a guitar in hand, Rhodus let the innermost contents of her heart spill onto the stage, interrupting her sweet sentiments only to request more backtrack drums. Though her soft voice painted romantic metaphors between nature and love, it also spoke of daily trivialities such as going to the DMV. Rhodus strummed past technical difficulties as easily as she sang of past loves, ending her set just as eager as the audience to hear TV Girl.

And as the first beats of “Cigarettes out the Window” filled the former Masonic Lodge, it was clear that TV Girl was ready to be heard. The crowd squeezed together, swaying in every direction as each song bled into the next, Petering’s voice the only guide in the dreamy haze of synths and samples. Joined by members Wyatt Harmon and Jason Wyman, Petering so easily fell into the hypnotic rhythm of his melodies. He, too, danced to the vulnerabilities he confessed on stage, bopping his head up and down along with the audience as he recounted failed relationships and misunderstandings. Perhaps what made the show so dreamlike were the hundreds of bodies dancing to melancholy lyrics of regret and heartbreak in a way only TV Girl could bring about.

Illuminated from behind by the infamous mystery dream girl logo, TV Girl tore through favorites such as “Lovers Rock” and “Birds Dont Sing,” while throwing in rarities from their mixtape days for the “OG fans,” who mouthed the lyrics as though they were their own along with Petering.

Not absent from the night was stage-banter, which Petering was sure to weave throughout the set, topics ranging from the band’s origins to tour life.

“I get drunk every night doing the same thing, traveling around with my best friends and winding up with a big wad of cash I can’t even fold. You guys should try it sometime,” said Petering.

And that wasn’t the only advice Petering shared to the crowd of fellow millennials just as confused and lost as him. A band dedicated to exploring the realities of love, Petering was quick to admit the absurdity of love songs and their many mixed messages. From John Lennon’s “All You Need Is Love” to Tina Turner’s “What’s Love Got To Do With It,” there’s no easy answer to what this whole love thing is about. To Petering, there’s only one song that presents the facts as they are: Jimmy Lewis’s song off the Back to the Future soundtrack in which he states, “the power of love is a curious thing.” Just where this power comes from remains unknown, but it’s a mystery TV Girl is willing to follow.

As the night came to an inevitable close, TV Girl remained on stage, Petering proceeding to walk the audience through a future that would not happen, one in which the trio would walk off stage into the green room to only be summoned back onstage to cheering fans for the encore of a lifetime. No, instead the band saved everyone the hassle and got straight to the music, ending the night with the closing track to their 2016 album Who Really Cares, “Heaven Is a Bedroom.”

TV Girl escaped the heat of the stage to cheers from an audience who hardly noticed an hour had gone by, and perhaps had fallen for the same mistake Petering did when he confused a bedroom for heaven. 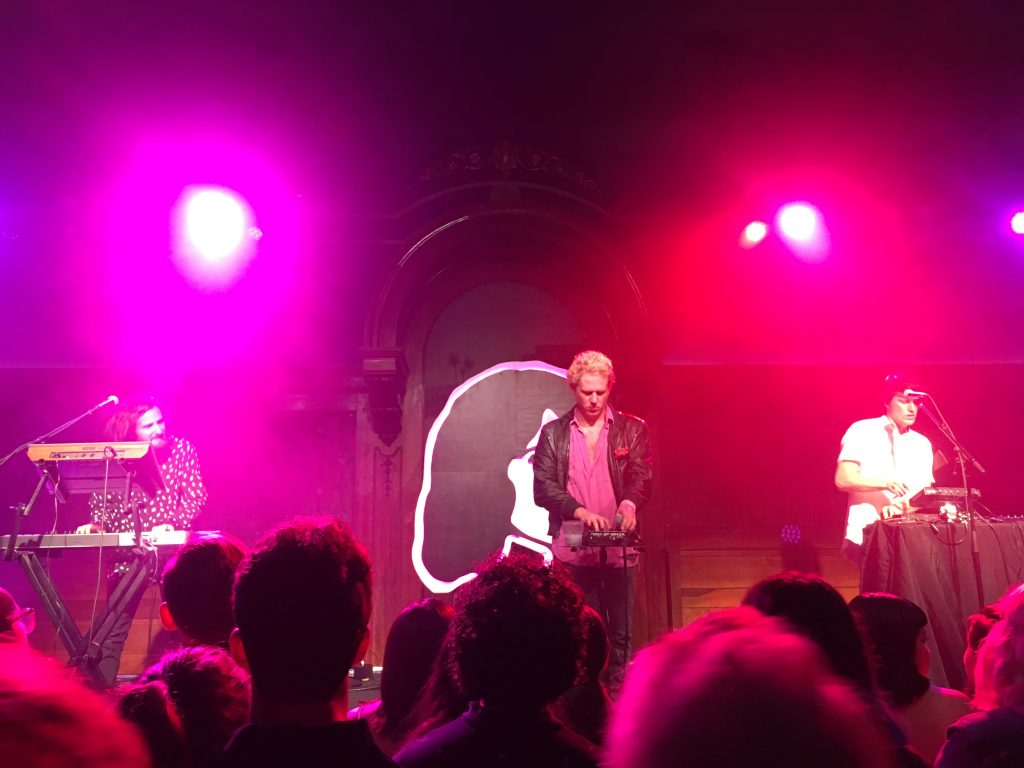