The Head and The Heart light up The Observatory 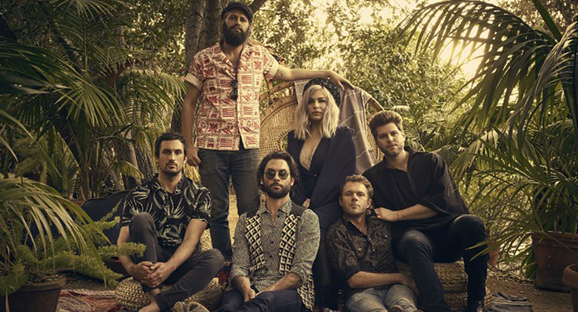 “Wait. Hold on. Before we start again, I just want to say thank you. I can’t tell you how much I needed this,” said Charity Rose Thielen, (vocals/guitar/percussion/keys) for indie-folk band, The Head and The Heart, behind locks of faded pink hair.

Blinking back tears, she gratefully looked into the audience staring back up at her, a deep connection felt both ways. “I don’t know if it’s the venue or what, but I feel so close to all of you, and it just feels like we are all together in this,”said Thielen.

And she was right. But it wasn’t just the The Observatory’s 500 capacity that made the night feel so intimate and special: it was the music.

I lost my dad to brain cancer in middle school. To help me cope, my mom sent me to a month long sleep-away camp in Florissant, Colorado. There, during that difficult time, I found The Head and The Heart. Long summer days were completed with nights by campfires singing songs by The Head and The Heart, especially “Rivers and Roads” off their self-titled debut, The Head and The Heart. The album which turned out to be the top-selling album of the year for the independent label. All the while, I continued listening to them, and over time they became my favorite band. I turned to their music in times of struggle, or when I just needed some magic.

So, after being a fan for seven years, the chance to see them live in downtown Santa Ana left me more than excited. I arrived at the venue right as doors opened. The crowd all pulsed with delight as we waited in anticipation for beautiful piano, drums, guitar and violin. After what felt like hours, the jittery conversations finally ceased as the fluorescents of the room faded, the darkness only bursting into light when the soaring piano intro of “City of Angels” began, a smile-inducing song which pays homage to Los Angeles. Lead vocalist and guitarist, Jonathan Russel wore a red ascot and as he sang and danced on stage alongside Matt Gervais, Theilen’s husband currently standing in for co-frontman, Josiah Johnson, as he continues his hiatus for personal health reasons.

Only the third show of their summer tour, energies were high, all six members looking at one another with love as they played for an audience just as excited to be there. To see their passion live, not only for each other but their music, was everything I had imagined those summer nights long ago.

Colors danced across the ceiling as the set went on. Each song contained an arc with flashes of energy which made everyone move with their entire being and sing at the top of their lungs, as well as quiet moments where it seemed that time stopped, and only the soft melody could be heard.

A particularly emotionally-charged moment was when the band performed one of their most stripped away songs, “Oh My Dear,” with only an electric guitar to back up Jonathan Russel’s vocals. He stood on stage surrounded by darkness, illuminated by a spotlight, each chord progression charged with feeling. As an audience, we were holding our breaths. The quiet moment was broken by lights being raised as the song transitioned into “I Don’t Mind,”one of their most pop sounding songs off the album, Signs of Light.

The night was not devoid of the consequences of live music. The soft intro of “Winter Song” was cut short when Theilen noticed the lead guitar was out of tune. Laughing, she said, “I’m no musician, but I think that guitar needs tuning.” It was corrected quickly, and we all continued to dance and listen to her sweet voice and gorgeous violin.

They ended the magical night with an encore comprised of “Library Magic,” “Sounds Like Hallelujah,” “Shake,” and finally, “Rivers and Roads,” all of which gorgeously headlined Theilen’s vulnerable, beautiful voice and Tyler Williams’s incredible percussion. The concert ended right where my love for The Head and The Heart began. It was a night I will never forget.