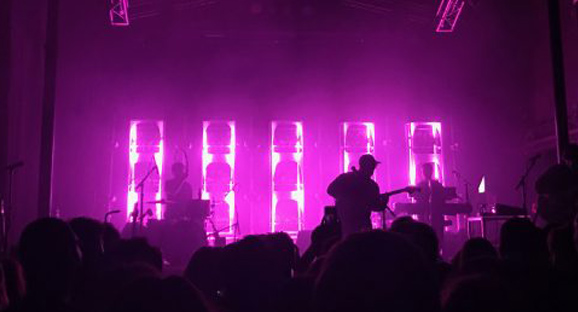 Out of the darkness, Unknown Mortal Orchestra emerged as silhouettes, backlit by pillars of purple light, concealed rather than illuminated, hiding from the hundreds of eyes staring up at them. Yet loneliness found its way onto stage as frontman Ruban Nielson’s voice echoed throughout the crowded Santa Ana Observatory, making everyone feel alone if for just a second. But never longer, as Nielson stepped into the light and repeated for the last time, “if you need to, you can get away from the sun.”

Nielson took that further. During an instrumental break in “Swim and Sleep (Like a Shark,)” Nielson hopped off stage into the pit, splitting the audience into halves as he made his way to the back of the venue, disappearing from sight as the crowd turned to each other in confusion, only to magically resurface moments later, guitar in hand, at the top of the balcony for all to see. 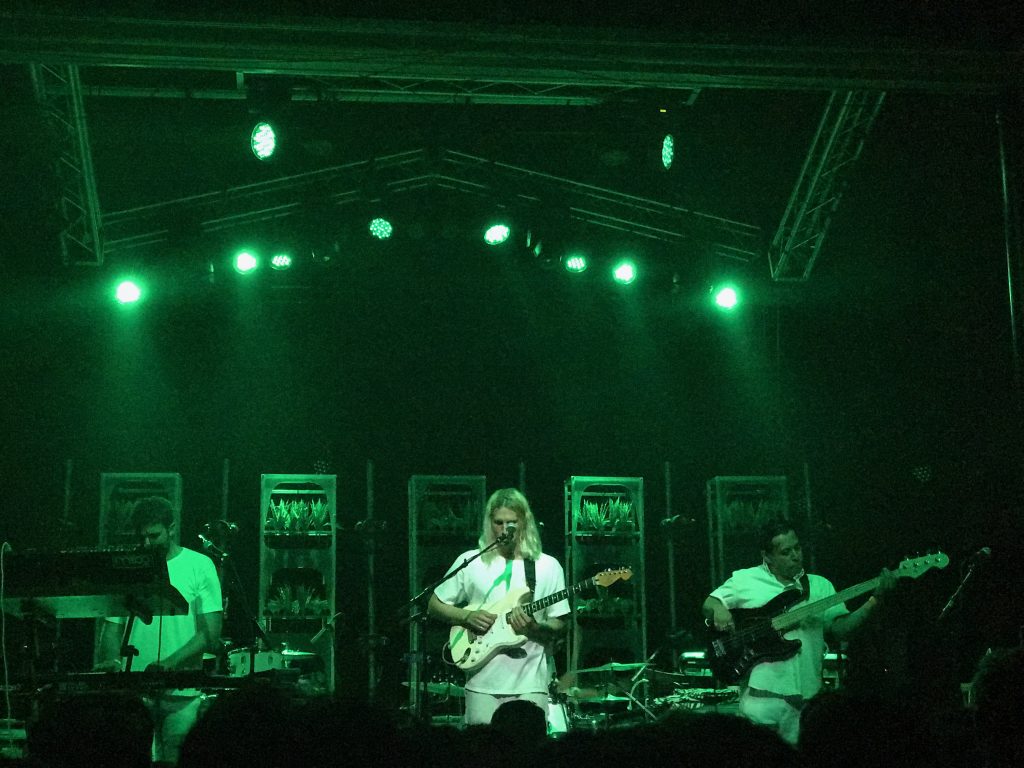 Opening for UMO was Neil Frances, the singular title for the Los Angeles based duo comprised of Marc Gilfry and Jordan Feller. Dressed in all white, the band’s moody melodies enveloped the audience in a dreamy atmosphere, timeless and spaceless, easy to melt into and hard to escape. So much so, the audience found a difficult awakening when Neil Frances announced their final song. But the duo left with a promise to meet again, and like Nielson, ditched the stage for the crowd.

“We’re huge fans, so we’ll be out there watching Unknown Mortal Orchestra with you,” said Gilfry.

And though the Portland/New Zealand band clung to darkness in the first few minutes of their set, after Nielson’s stunt, they were ready to seen, inside and out. Luckily for longtime fans, their multi-colored performance involved not only a journey through modern discontent and romantic hardships, but a catalog that has tackled these themes since Nielson started releasing music in 2010. From fuzzy “Ffunny Ffriends,” the track that first gained the band notice, to fan favorites “So Good at Being in Trouble” and “Multi-Love,” UMO showcased the scope of their complex lyricism and skilled musicianship that made the previously unknown band what it is today.

Still, the night wasn’t simply a rehashing of previous endeavors, of their “greatest hits,” but a reimagining of the songs that define UMO and continue to evolve along with the band as they make sense of an ever-changing social landscape. It’s this exploration of today’s current climate that UMO presents on their latest album, Sex & Food, maintaining if not furthering the level of vulnerability of its precursor, Multi-Love.

That’s evident in the sad-but-true reality presented in “Not in Love We’re Just High,” which Nielson performed in the center of the pit, his face illuminated by cellphone flashes as hands reached out to touch him. He proceeded to lead those hands in clapping, turning to face the stage in need of a frontman as the audience cheered behind him. Climbing over the barrier, Nielson rejoined his band and ended the downbeat track with an intensity matching the song’s vulnerability, only stopped by a dramatic cutting of the lights.

But it didn’t stop there, in the darkness. A rainbow of lights fell upon the deserted stage as UMO made their way back to their instruments. It only took one note, one head nod from Nielson, for audience members to scream out “Hunnybee.” A love song dedicated to Nielson’s daughter, it’s the other side of his troubled psych, the opposite of loneliness. To fans, it’s the entirety of UMO, equal parts love and paranoia, a bittersweet honesty presented through psychedelic rock, the inner workings of Nielson’s mind laid bare.