Animal Collective’s return to the introspective world of Sung Tongs 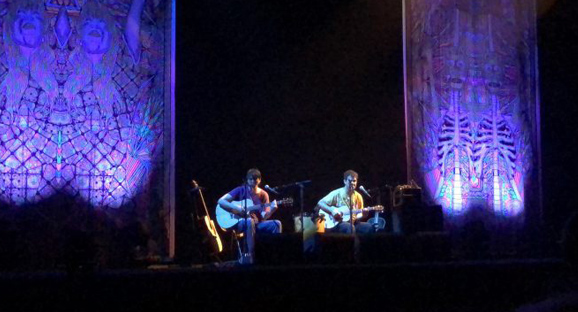 “There’s a place I know where we can go,” whispered David Portner, otherwise known as Avey Tare, into two conjoined microphones, strumming alongside childhood friend and bandmate, Noah Lennox, nicknamed Panda Bear, and along with Tare, one-half of Animal Collective.

Where that place may be Tare never fully answers in the lyrics of “Good Lovin Outside,” but it’s clear it’s not here. It’s lost somewhere out there in the unknown, waiting to be explored, to be found.

It’s that childlike spirit of secrets and discovery that make up Sung Tongs, where nostalgia meets maturity and sentiments are taken as they are. It’s a strange realm, one Animal Collective has always occupied in some way or another, finding a way through the distortions of childhood’s innocence and adulthood’s introspection, never betraying the other, but existing in both simultaneously.

It’s a careful balance, one that garnered the band a considerable amount of attention when the album was released in 2004. And now, 14 years later, the band has decided to return back into the world of Sung Tongs, playing the full album live for the first time in 2017, followed by a tour across the U.S. and South America.

“Something like this probably won’t happen again,” Tare said to the second-night audience at The Theatre at Ace Hotel in downtown Los Angeles, met by a mixture of cheers and sighs, a realization that the night was one of a kind.

But that reality had already settled in long before, in the voice of Lonnie Holley. Before entering on stage for his final night opening for Animal Collective, Holley was introduced by a lengthy summary of his personal life and work as an artist, which has led to exhibitions in the Smithsonian and artwork displayed in the White House. But more shocking than his accomplishments is the nature of his music: never predetermined, but entirely of the moment. It’s here, then it’s gone.

And it was. Holley sat behind a tapestry with his initials and began to sing, at first quietly, still warming up and searching through his heart’s contents, but quickly began to cry out, standing to his feet in an outpour of emotion. Lyrics flew out of his mouth never to be heard again. Beautiful harmonies blended in mysterious ways never to be heard again. One couldn’t help but feel the slightest tinge of anxiousness, that no one was recording Holley’s genius, that it was going all to waste. But that’s not the point at all. Holley’s music lives inside him, constantly changing form and expression. It’s not a prisoner of time; it transcends it.

“People ask me, where is the music coming from Mr. Holley? It’s coming out of me,” said Holley.

That view of music as an extension of self is where Animal Collective thrives. As the duo walked onto a relatively empty stage, save two chairs, and adjusted their instruments, it was as though they were returning back to an old house—the one dreamt of throughout Sung Tongs, a space of reminiscing without getting too close.

And with one exhaled “ah” from Tare and Bear, Sung Tongs began, from the swirling “Leaf House,” through the cathartic “We Tigers,” to the ruminative “Whaddit I Done.” Each song bled into the next, the music chasing the hypnotic voices which led the way, falling in and out of harmony, back and forth between soft coos and shrieking. Like children playing tag, or rather, adolescents escaping the pressures or maturity. They screamed, banged drums, meowed and made noises, losing every piece of themselves in pure happiness, like the Wild Things in Where the Wild Things Are.

And so audience members left their seating to run through the aisles of the gothic-style theatre, forming chains and mimicking movements as though dancing around a fire in some ritualistic celebration of youth. But everyone remained seated during the over twelve-minute “Visiting Friends,” a hypnotic blend of vocalizations and constant strumming, capturing what it feels like to be young, the raw joy of possibility.

Tare and Bear were silent only once during the performance, between breaks in the harmonies of “College,” delaying the song’s mere seven lyrics, bringing audience members to the edge of their seats until finally everyone in the room cried out: “You don’t have to go to college.” All tensions disappeared as the reality of the statement sunk in, and uncertainty transformed into encouragement.

“That’s Sung Tongs,” Tare said to a standing ovation, Bear silent besides him.

But the night wasn’t over, nor was Animal Collective ready to leave. For Sung Tongs was unfinished without its accompaniment, the EP collaboration with Vashti Bunyan, Prospect Hummer.

“I remember learning how to dive,” were the last words of the night, depicting a crystal-clear scene of a child on a diving board, not ready to jump and let go. But no one ever really is, although we all make our way down to the water sometime. So Animal Collective lives in both places at once, always just about to hit the water.