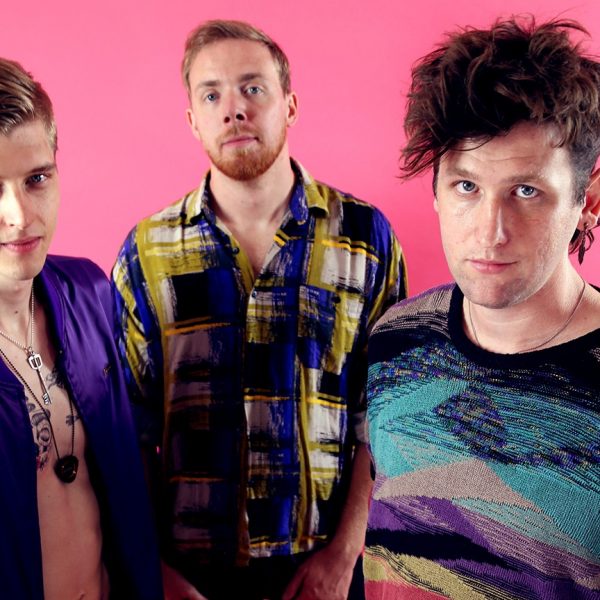 According to the Sleep Health Foundation, “We dream most vividly during Rapid Eye Movement (REM) sleep.” Up-and-coming LA band, Water District thinks differently. As heard on the opening track of their latest EP, “Neo Emo,” they say we should dream with our eyes open, and not limit our aspirations to the late hours of the night. Fronted by lead singer and guitarist Tice Griffin with Erik Williams on drums and Ryan Scottie on bass, Water District captures the spirit of pop-punk greats like Blink-182 merged with the lyricism of indie-rock bands like The Smiths. (Fun Fact: The initials of their first names also put the T.E.R. in WaTER District). This combo creates a heartfelt, mellifluous sound that needs a catchy new name. Indie Punk? Modern Emo Wave? No. Neo Emo.

This is what makes Water District the band they are. They create a unique sound for a new generation who may not have been exposed to late 80’s and 90’s music that inspired the band. I had the pleasure of meeting the band when they came into the station for an in-studio performance. Three fellows stylishly dressed to their Neo Emo look, they were passionate about their work and eager to share it. Williams talked to me about the process of branding themselves under a genre they created. What I didn’t realize then, was that their next release would be the debut of their Neo Emo moniker.

Drumsticks clack out a four count. An upbeat guitar starts with crescendoing drums behind it. The energy in our studio feels as live as a concert. “Dream With Your Eyes Open” is the first track off Neo Emo, full of energy that perks me up. The lyrics kick in with Griffin singing, “I can see why, you’re afraid to try, to live your life, you fell too many times.” The vague lyrics suggest a sense of reassurance towards a specific someone, but can be made personal for anyone who listens. “It’s alright if you fall backwards, it’s alright,” Griffin sings. “Dream with your eyes open, the fear will fade away.” For me, this song is Water District’s way of reminding the audience to pursue their dreams, very much in the way the band is following their with Neo Emo. The sweet, simple and short verses convey powerful meaning, giving space for the listener to internalize and dream without too much focus on the comprehension of complex lyrics.

“Alone” is the EP’s sad song. The lyrics are melancholic, the tempo is slower than any other track on the album and the track’s sound is very reminiscent of “The 1975” or “The La’s” with upbeat drums and long reverbing guitar notes giving you just a taste of the oncoming bittersweetness. Griffin sings of two people in a one sided relationship, taking on the person wanting out of the relationship. Trying to console and convince their S.O. that they’re just not right for each other, Griffin sings of the routine and familiarity of their relationship, accented in lyrics, “Just let me go. Stop holding onto what, you know. The longer we wait, the more it shows. That we’re better off alone. You’ve gotta let me go.” The truth in Griffin’s lyrics are cutting. We can hear his heartbreak and that of his lover. It had to have been tough for them.

The mood lifts as high energy returns on the EP’s penultimate track. With crashing cymbals, guitar licks and the band shouting, “Hey, Hey” in classic pop-punk fashion, “Take off Your Clothes” is bitter in the best and most fun way possible. Griffin recalls a fling with a girl already in a relationship with a guy who was never around. Both wanting each other’s company, the two hook up in secret. As the song goes on, they fall in love, but he is unable to compete with her much more impressive boyfriend. During their last night of romance, he pleads for her to stay, only to have her walk out. The song is really depressing for sounding so upbeat. Putting myself in Griffin’s shoes really made the song much more poignant. The lyrics that stuck with me the most were during the second verse, “I’ve got to be honest, it’s breaking my heart. She says she loves me, but they’re never apart. She turns to kiss me, then looks away. Tells me she’ll miss me, on her wedding day.”

The album ends with “High Time,” a low-tempo track that tells an interesting story of falling in love overnight and staying in a relationship that isn’t healthy. It’s a call-to-action for those in one sided relationships where both parties don’t have each others best interest in mind. But for me, the song is colorless. The music feels basic, like I’ve heard it before from other bands. But at the time of me writing this review, “High Time” is the most listened to song on Water District’s Spotify, so maybe it’s just not for me.

Water District finds a way to combine the fun and catchiness of Blink-182, the genuine emotion and angst of Sleeping with Sirens, and the tenderness of 5 Seconds of Summer. In a time where the majority of pop music can be boiled down to an algorithm, it’s nice to see resurgences like Water District, finding original takes on established genres of music. Their sound is like modern 2000’s music with a 2010’s twist. You can catch me playing them loudly as I drive to the beach, windows down, singing my head off. I actually catch myself humming their songs at night before I head off to sleep thinking about the theme of the EP’s opening song. Don’t let your dreams simply be something that you interact with during REM sleep. Dream with your eyes open.