Concert Review: When We Were Young Fest at The Observatory Grounds

______________________________
Nostalgia was the theme at When We Were Young Fest (WWWY Fest) on Saturday, April 8 and Sunday, April 9 at the Observatory grounds in Santa Ana. Memories of old friends and past relationships filled the air. It had me wanting to sign-in to my old AIM account and reach out to old boyfriends, but it’s probably best that I didn’t.

The weekend was a tribute to middle school – from the red converse logo to the spiral notebook festival guide for the weekend, I was immediately transported back to my younger days. The two days of the festival were spread over the Observatory grounds; using both the Constellation and Observatory room and the parking lot. Coming from a three day festival in the desert, Desert Daze, to this two day festival, WWWY Fest felt like the younger sibling of music festivals; the under appreciated, cool younger sibling, but still the younger sibling.

Now that music festivals are such a popular way to experience music, there are three things that seem to be requirements of a great music festival: beer, food and music.

The beer choices at this festival were pretty average but the beer gardens that held the beer were on point. There were three different beer gardens, all surrounding the main stage. Two of them were off to the left and right side of the stage so you could be in the beer garden and still have a clear view of the main stage while enjoying your beer. The third garden was at the very edge of the festival grounds facing the main stage. This garden had lounge chairs and couches for festivalgoers to sit at. In addition to the three beer gardens, the usual Observatory bar was fully stocked, serving hard liquor under the shade for those who were interested.

As you entered the area with the food, there were signs that read:

“Out of respect to Morrissey and his long standing activism for animal rights, there will be no meat products served at When We Were Young festival. We appreciate your understanding and support of this cause. For more information, please check out http://www,peta.org/morrissey.”

The unexpected veganism at the festival had festivalgoers and festival workers talking about the food all weekend. As a newly formed vegan, I was beyond excited to see those signs. They had food stands that contained pizza, burgers, tacos, veggie wraps and hummus platters, in addition to two food trucks and standard Santa Ana food carts with snow cones, fresh fruit and Mexican potato chips.

Outside of the festival grounds, where everyone waited for their ubers, lyfts and shuttles, hot dog stands were waiting to take advantage of the vegan day that was just had.

Day two of the festival was not vegan, as Morrissey had already performed and left. This meant the food trucks reverted back to their original menus and I was back to asking everyone how they cooked their food before ordering. Even though the food was no longer vegan, Saturday’s menu was still the topic of conversation for both the festivalgoers and even the security guards.

There were three stages playing music and one room with a DJ set. During WWWY Fest, the Constellation room was open a few times throughout the day with DJ’s playing all vinyl tributes to famous artists such as, Prince, Selena, David Bowie, The Cure and The Smiths. The Observatory room was used for some of the smaller acts of the festival. The first stage you could hear as you entered the festival grounds was the Dancing in the Street Stage, which held medium size acts, such as, Beach Fossils and Foxygen. The last stage they had was the Heroes stage, which was the main stage of the weekend where both Morrissey and the Descendants closed down the nights they performed without anyone on another stage competing with them.

The music was, expectantly, amazing. Day one was filled with the anticipation of finally getting to see Morrissey. But before I was able to see him, Streetlight Manifesto had a rad set on the Heroes stage and a last minute decision to see Homeshake on the Dancing in the Street Stage had me pleasantly surprised by their sound.

After Homeshake it was back to the main stage to check out Alkaline Trio, a band whose name I hadn’t heard in… I don’t know how many years… to relive my angsty teen years.

Then it was back to the Dancing in the Street Stage with Beach Fossils where people really were dancing in the street. As much as I was enjoying their easy listening vibe, I headed back to the Heroes stage to try to get a good spot for Cage the Elephant with the idea that I would be in that same spot for AFI and Morrissey. As it is with festival life, you either see all the bands you want to see with a bad view, or you stand at the stage for some time in hopes of being upfront for whom you most want to see.

Unfortunately, I wasn’t the first festivalgoer there and other people had the same idea that I had so my spot wasn’t the best, but still was in sight of the stage. It had been six years since I last saw Cage the Elephant perform and seeing them this time was better than the last, which is what you hope when you see a band multiple times. They played some new songs like, “Cold Cold Cold” and some classics like, “Ain’t No Rest for the Wicked.”

Up next was, AFI and I never imagined I would have had the opportunity to see them live. The lead singer, Davey Havok, said, “ in those 26 years [of being a band] never would we imagine…I’ll tell you later,” as his band mates cut him off to jump into a song. So many different thoughts were going through my head as to what he could’ve been talking about and when he finally finished his thought a few songs later; I should’ve guessed what it was about. Morrissey. “Never in 26 years have we imagined we’d share the stage with Morrissey,” Havok said. And honestly, I’m sure most people there had the same thought.

AFI finished their set and they were switching out the instruments and gear for Morrissey with videos playing in the background of famous artists and activists singing and speaking about what is important to them. All the videos were carefully picked by Morrissey and were aligned with what his platform would be based on that day.

Based on the vegan day we had all experienced, I was expecting his platform to involve animal rights. However, that’s not the idea that Morrissey had. When he came out on stage, he walked up to the front with his band and everyone, except Morrissey, came out wearing “F*** Trump” shirts, making his platform for the day very clear. After standing there as the crowd cheered them on, they took their places on stage and immediately went into “There Is a Light That Never Goes Out,” a classic song by The Smiths that somehow sounded better live than it ever has on vinyl or any of the movies it was in.

Morrissey and his band recently returned from performing in Mexico and he said, “We had a great time in Mexico however, there is a very nasty tale in life, if the bad guys don’t get you, then the good guys will,” and then jumped into “Ganglord”. As they performed “Ganglord”, there were multiple police brutality videos playing on the big screen. As this song and the videos were playing, security could be seen pulling people who were too drunk and people who were getting smashed against the railing by the excited crowd, over the fence and thrown out to the back of the crowd, an interesting juxtaposition.

With just five minutes left of his set Morrissey went back stage to change into, what appeared to be, the same shirt in a different color. After wearing the shirt for about three songs, Morrissey took it off and threw it into the crowd, making me wish I endured the moshing during AFI to be close enough to catch his shirt, because, I am that crazy fan. He then went back stage for another outfit change, coming out in a sparkly suit coat that no one other than Morrissey would be able to pull off.

Morrissey justified his various comments about Trump and our current state in America by saying that he’s so liberal minded, he is actually immoral. After an hour and a half set full of political comments, and really, Morrissey just doing whatever Morrissey wants to do, he left us saying, “do not forget, be good to yourselves, be good to your mothers, be good to animals and G-D bless you.” Morrissey’s performance was everything I expected it would be and was the perfect end to the first day at the inaugural WWWY Fest.

The early afternoon of the second day was pretty back-to-back with performances I was eager to see. My day started with a performance from Pinback. A few issues with the sound made the performance slightly underwhelming. However, once the sound was fixed, Pinback sounded just as I would always imagine they would. After hearing a few of my favorites from Pinback, “Fortress” and “Good to Sea” I was off to see Tijuana Panthers perform.

Tijuana Panthers played a flawless set and kept things light throughout the show. After throwing a shoe back into the crowd that a crowd surfer had lost, they gave away a sold out Morrissey shirt from the festival to a girl in the front who was getting squished, proving that even after Morrissey left and the festival was no longer vegan, Morrissey was still there making an impact.

I jumped from the Tijuana Panthers set to see Dr. Dog perform on the Heroes stage. Their stage presence and sound were on point and had everyone in the crowd dancing along to every song.

Day two continued with Silversun Pickups surprising me with how many of their songs I actually know, a little bit from The Frights and The Buttertones before seeing Foxygen performed.

The first time I saw Foxygen was in October at Desert Daze and not much has changed between then and now. Their set still included the same choreographed dance moves they had the first time I saw them, and an outfit change from the front man, Sam France, that didn’t seem necessary for their 30 minute set. In all reality, I was really there to see Jonathan Rado, the other half of Foxygen, and was not disappointed by his performance.

The weekend was a great throwback to being a young kid and the music that is still being performed that reminds me of being young and carefree. For anyone looking for a laid back festival with good music, WWWY Fest is the place for you and I’m hoping that it doesn’t stop after their inaugural year.

A few photos from the weekend: 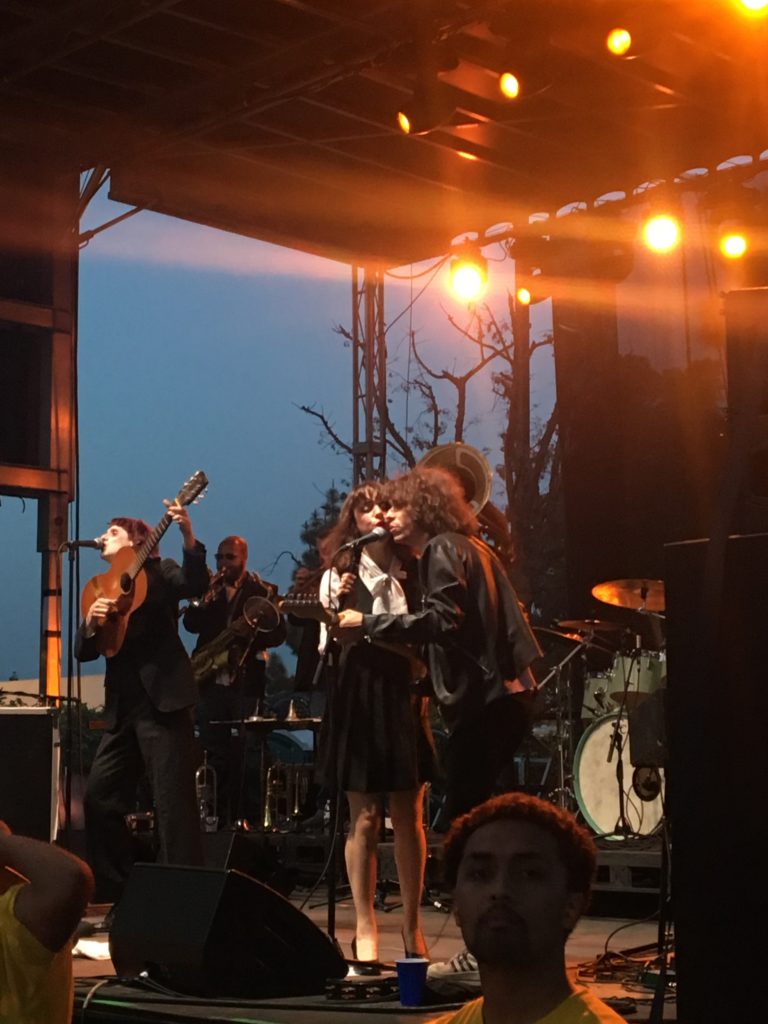 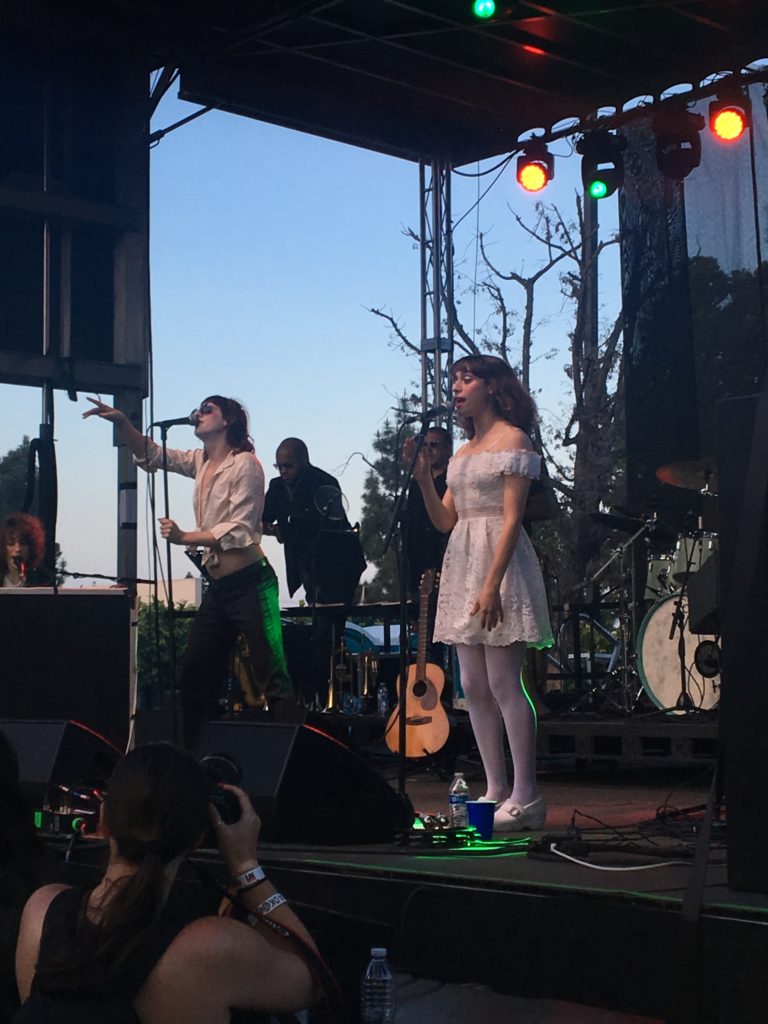 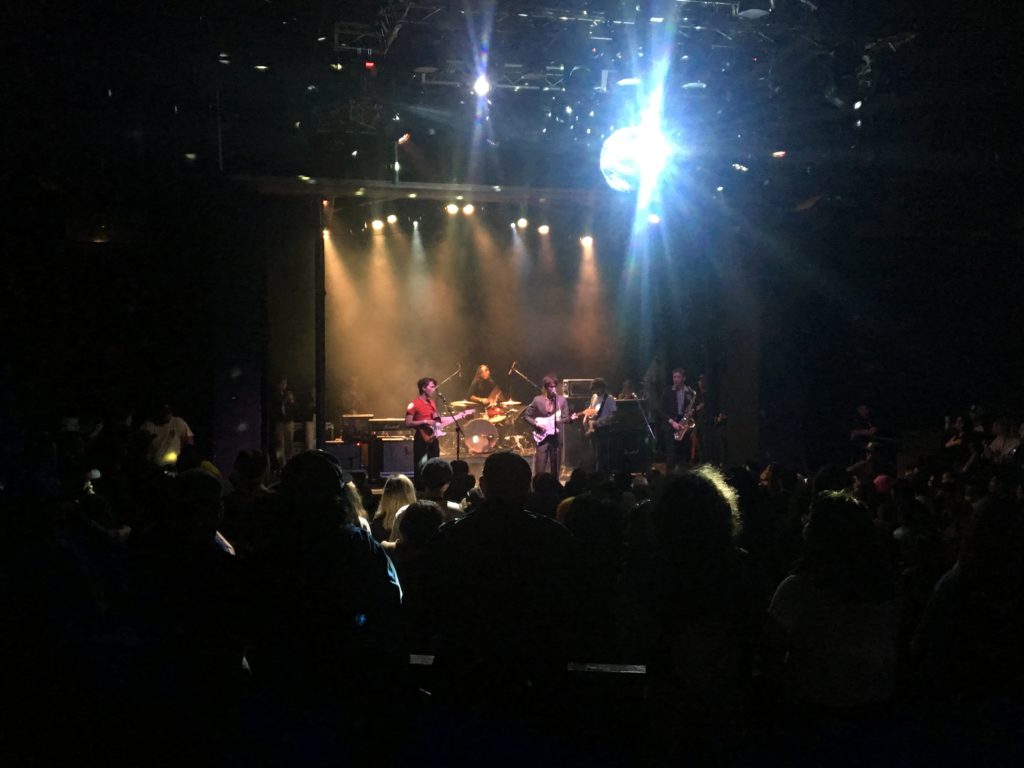 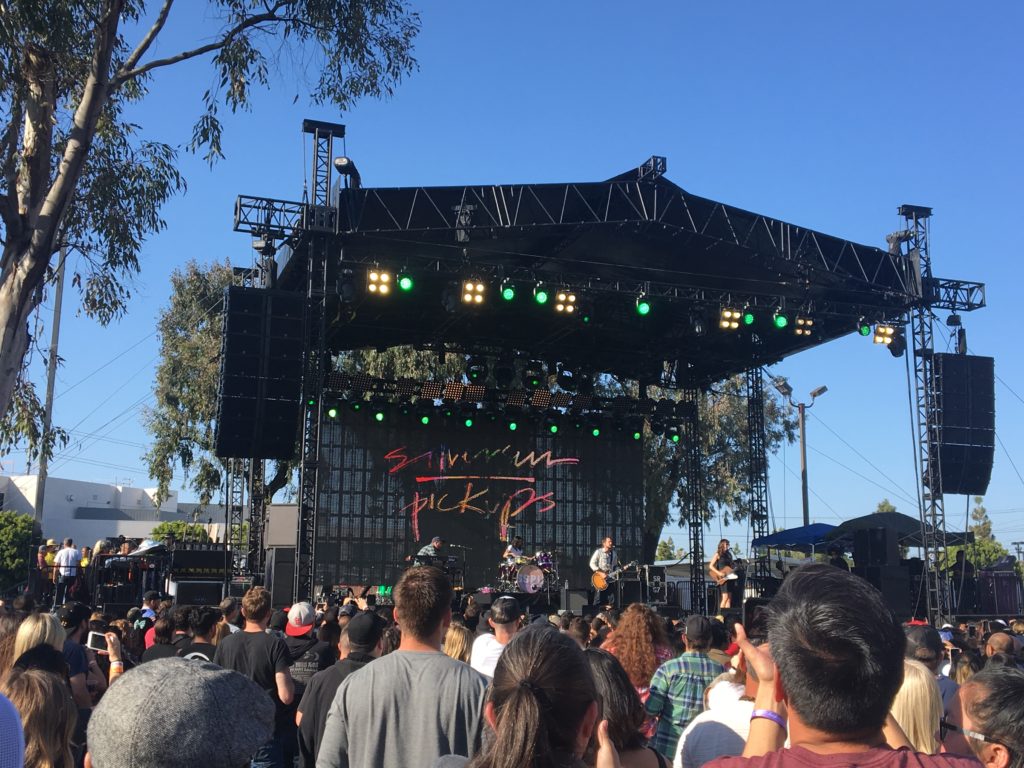 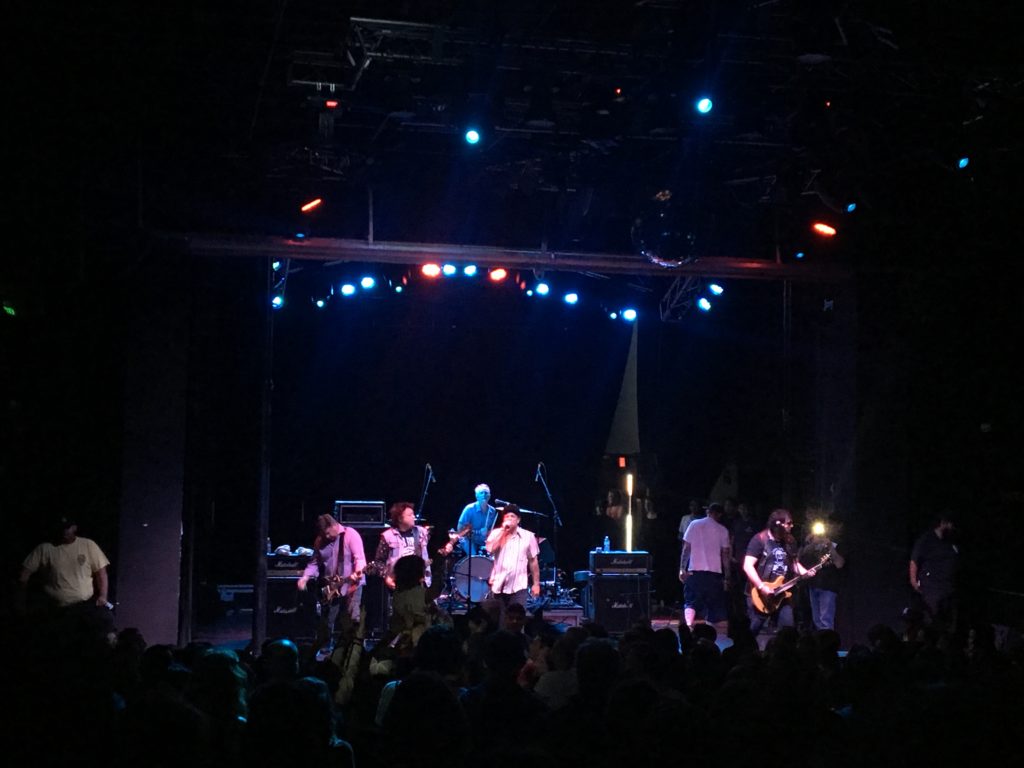 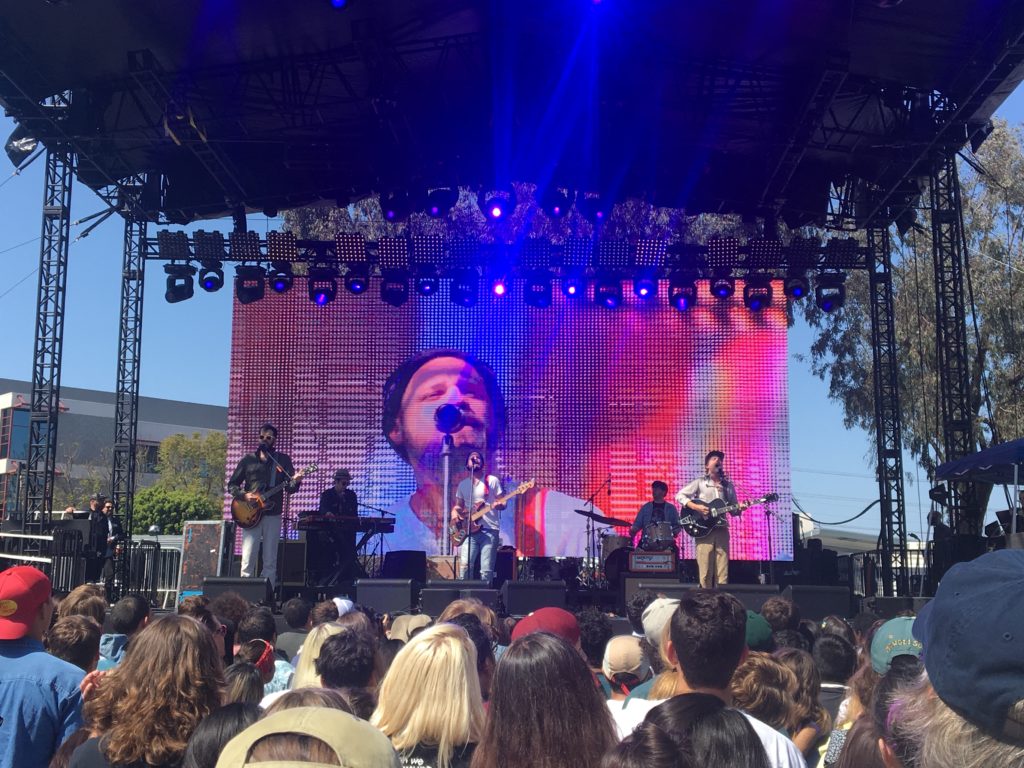 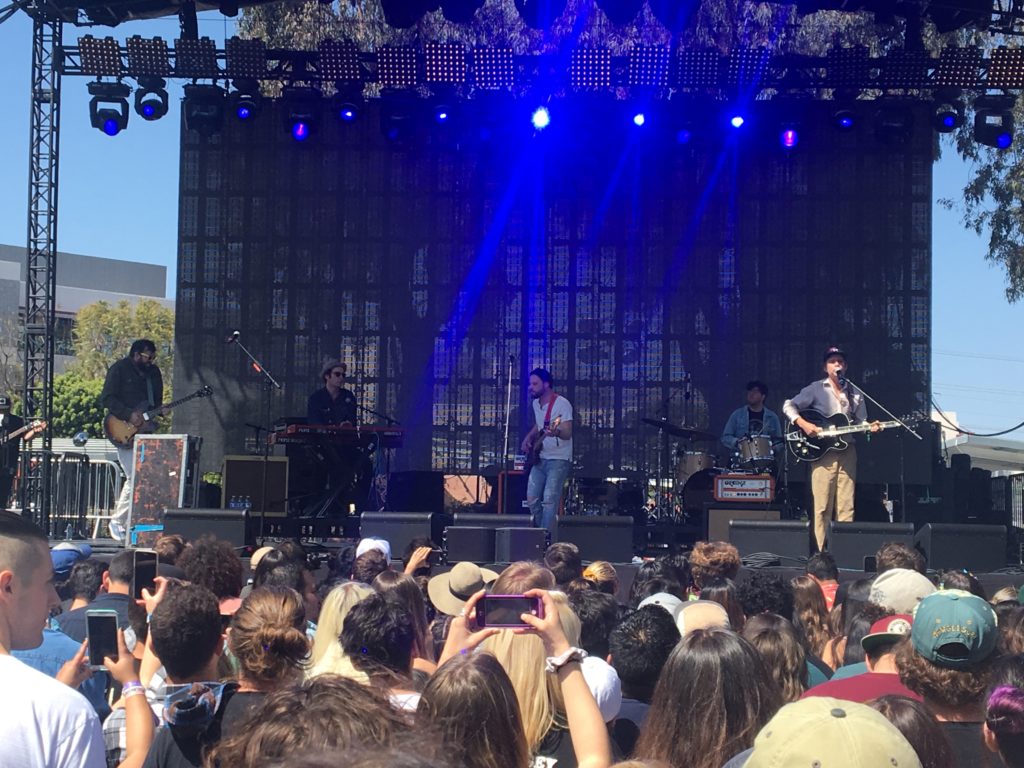 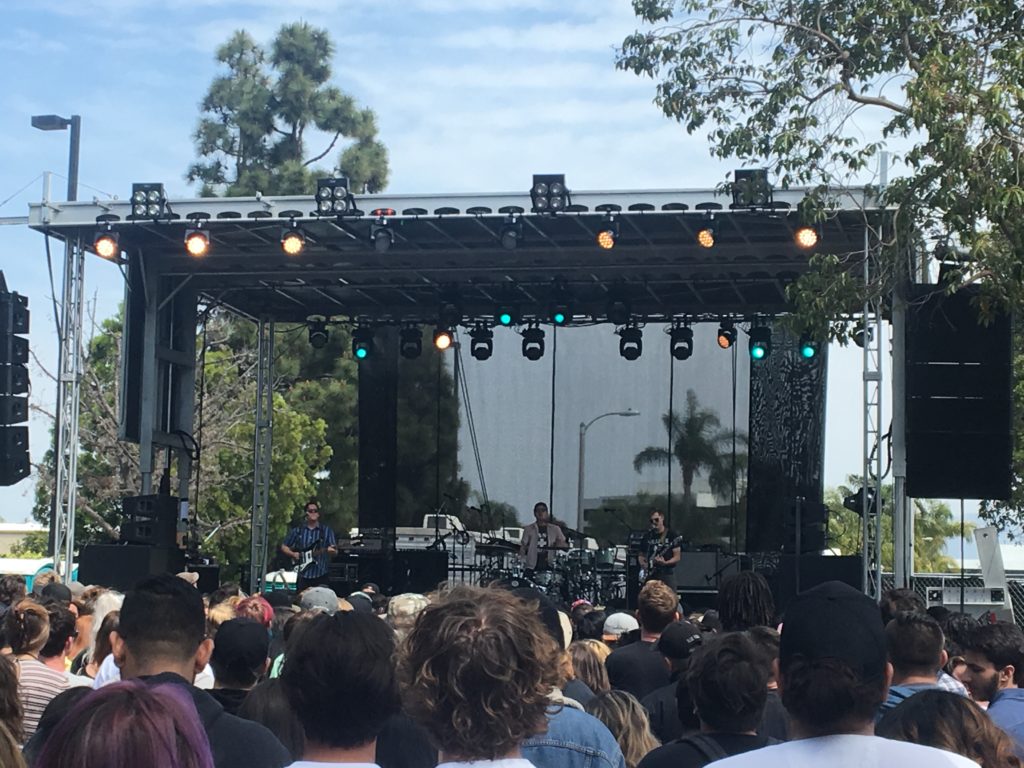 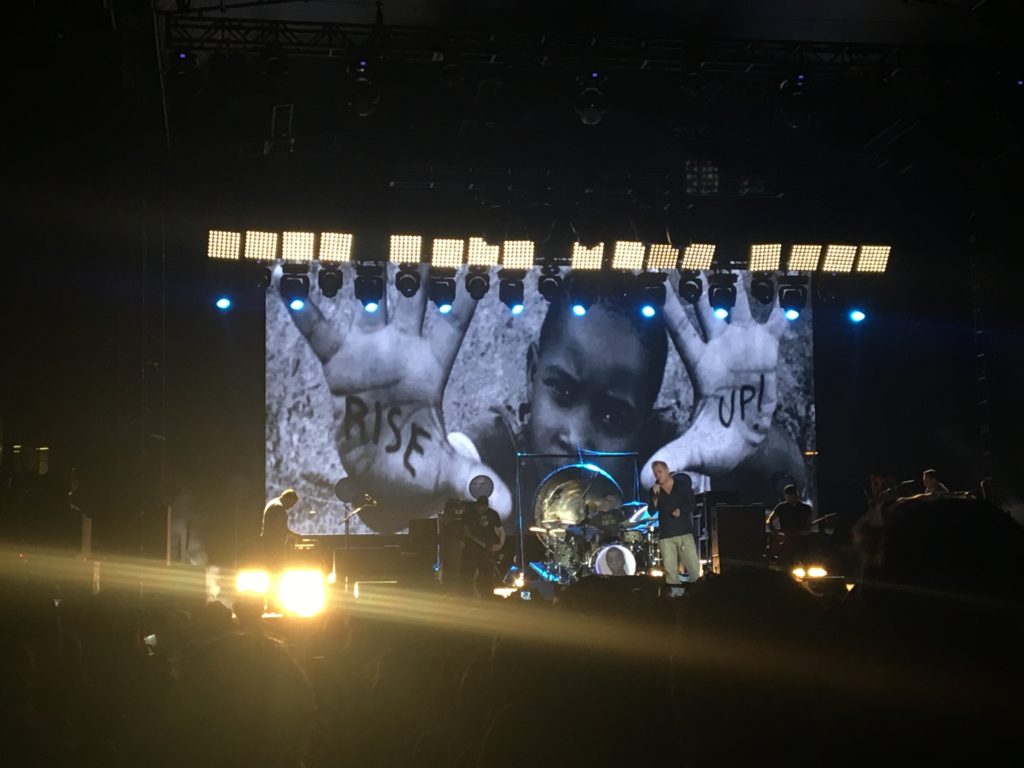 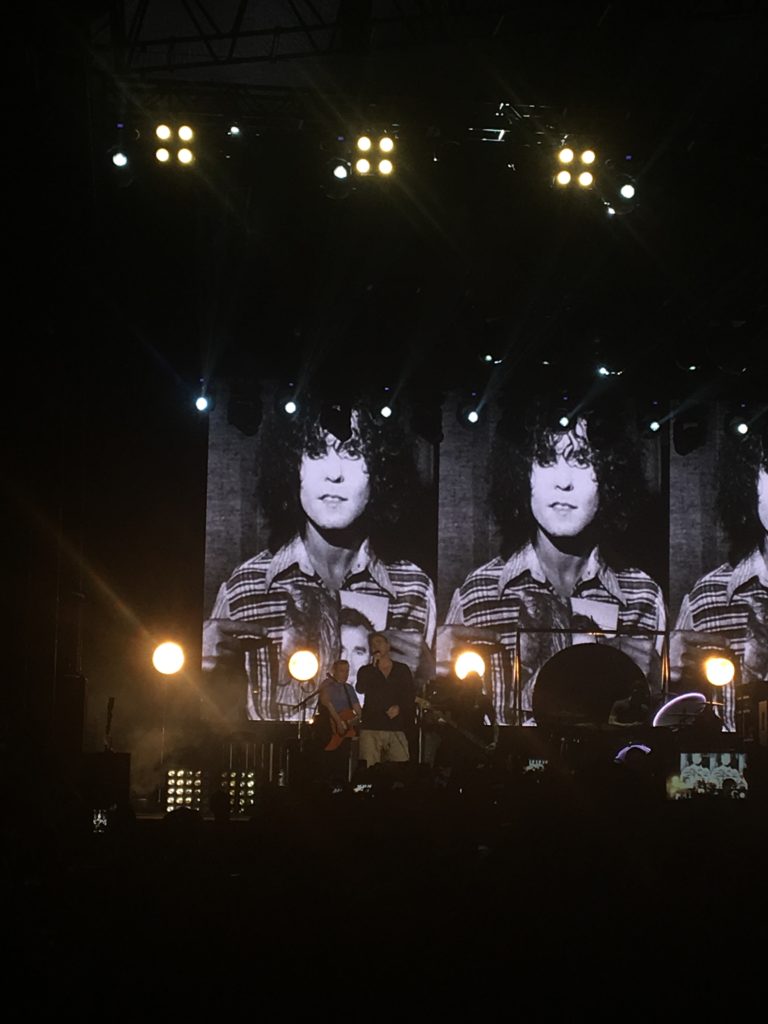 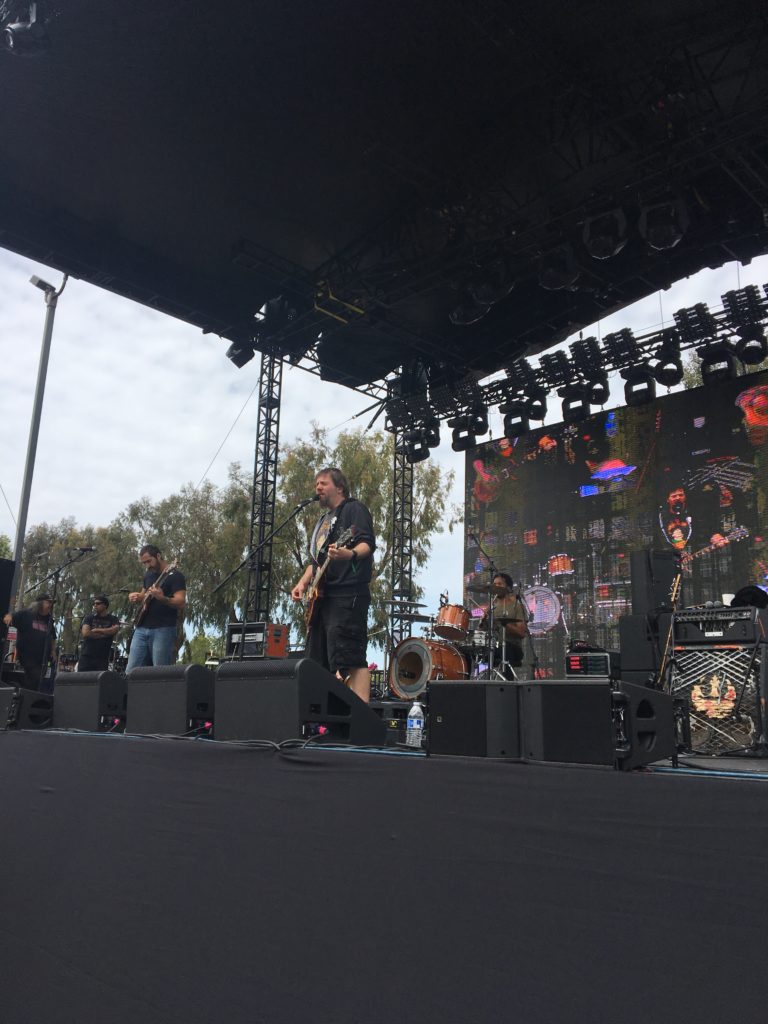 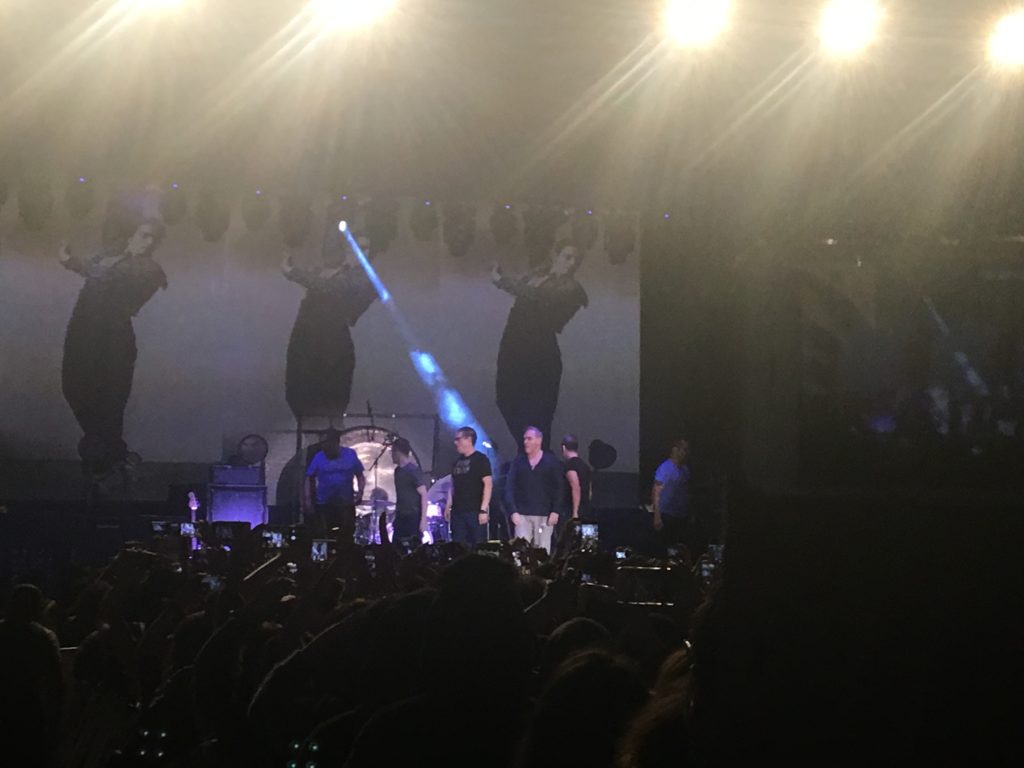 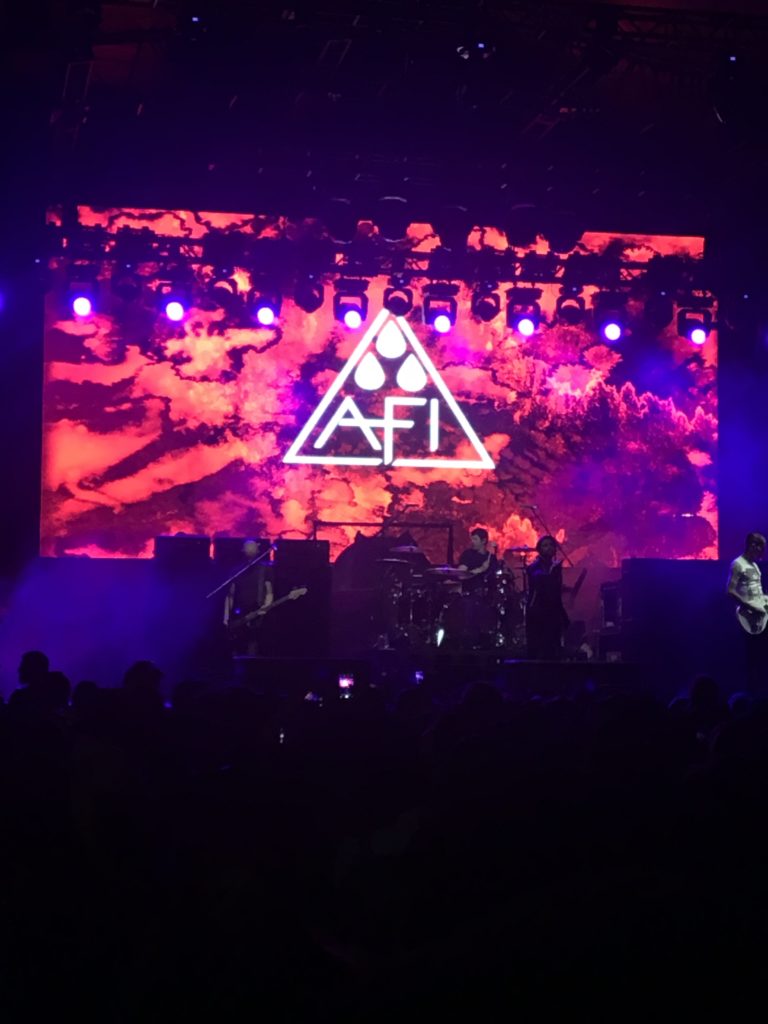 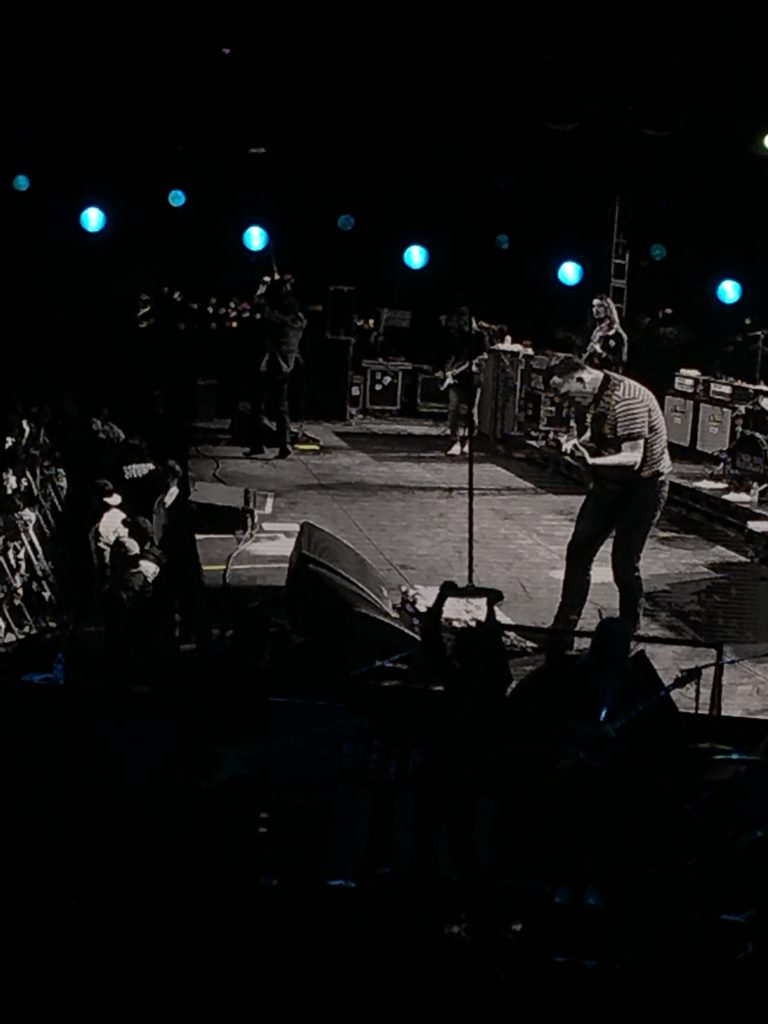 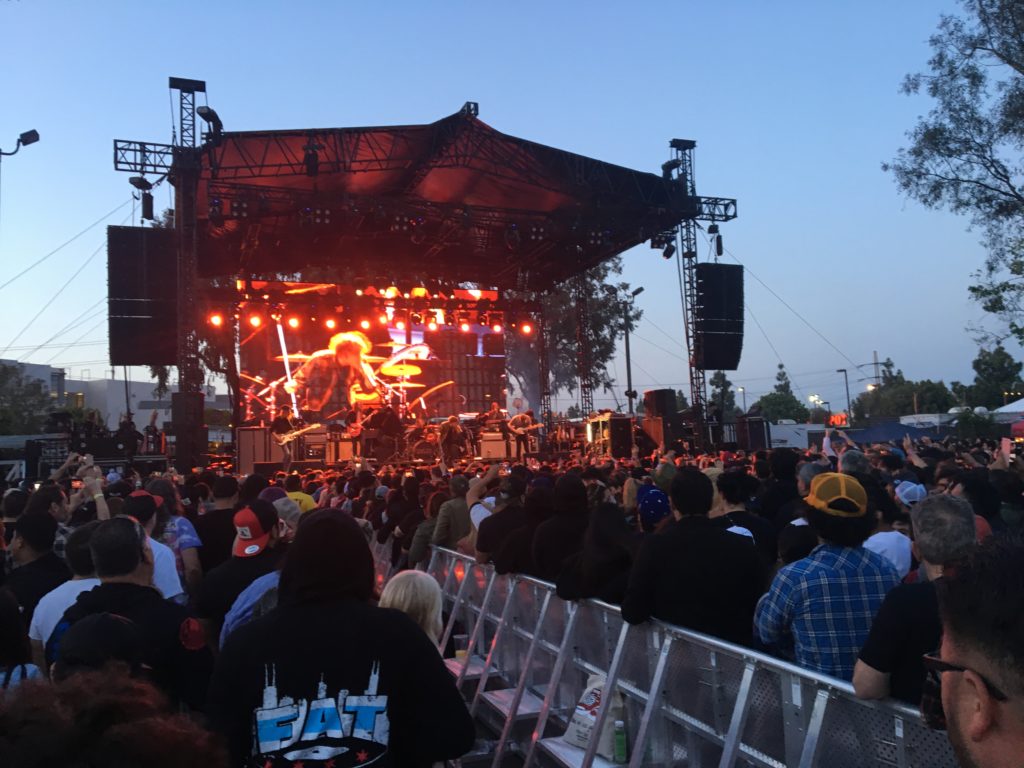