Get stoked on the Arroyo Seco lineup

The second annual Arroyo Seco lineup has just been announced by Goldenvoice, and the lineup is a doozy. The music festival will be held on June 23rd and 24th in Pasadena, CA. Located right outside the grounds of the Rose Bowl at the Brookside Golf Course, there will be two outdoor stages as well as a smaller stage located inside of a tent for a smaller concert feel. What sets this festival apart is that it’s set up in a way that the audience has the ability to watch full sets without having to rush from stage-to-stage.

This years poster features well-known artists like Neil Young & The Promise of Real, Jack White, Kings of Leon, and Alanis Morissette. Some of the “small font” bands include Trampled by Turtles, North Mississippi Allstars, and Irma Thomas. A killer lineup for all walks of music fans.

We love this event because it is a little more relaxed than most music festivals, and it has been described as the “adult-friendly Coachella.” Not only does this festival feature an excellent bill, but it also has unique food and drink vendors from the Pasadena and LA area. Some vendors that will be there this year are Beer Belly, Hanjip, and The Spare Room. The goal of the festival is to encourage locals to come and enjoy good music and good food, while still being able to sleep in their own beds at a decent hour. No camping in the middle of the desert? Cool. 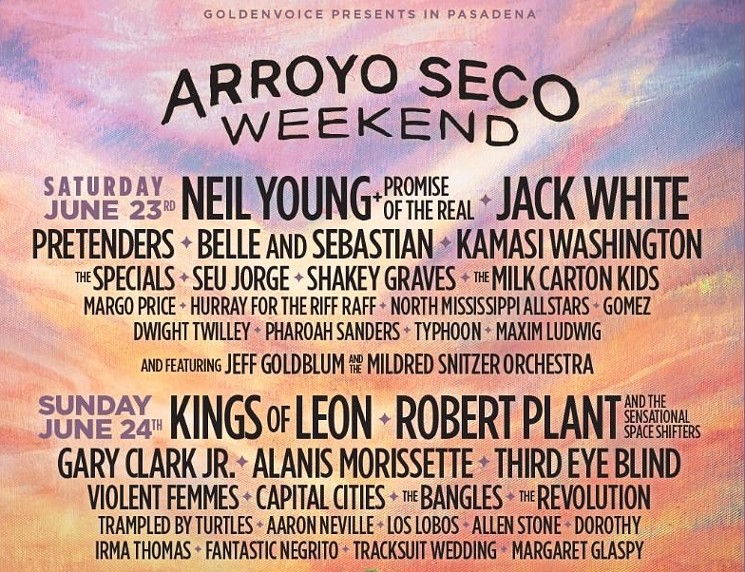