Getting Deep with Child Seat 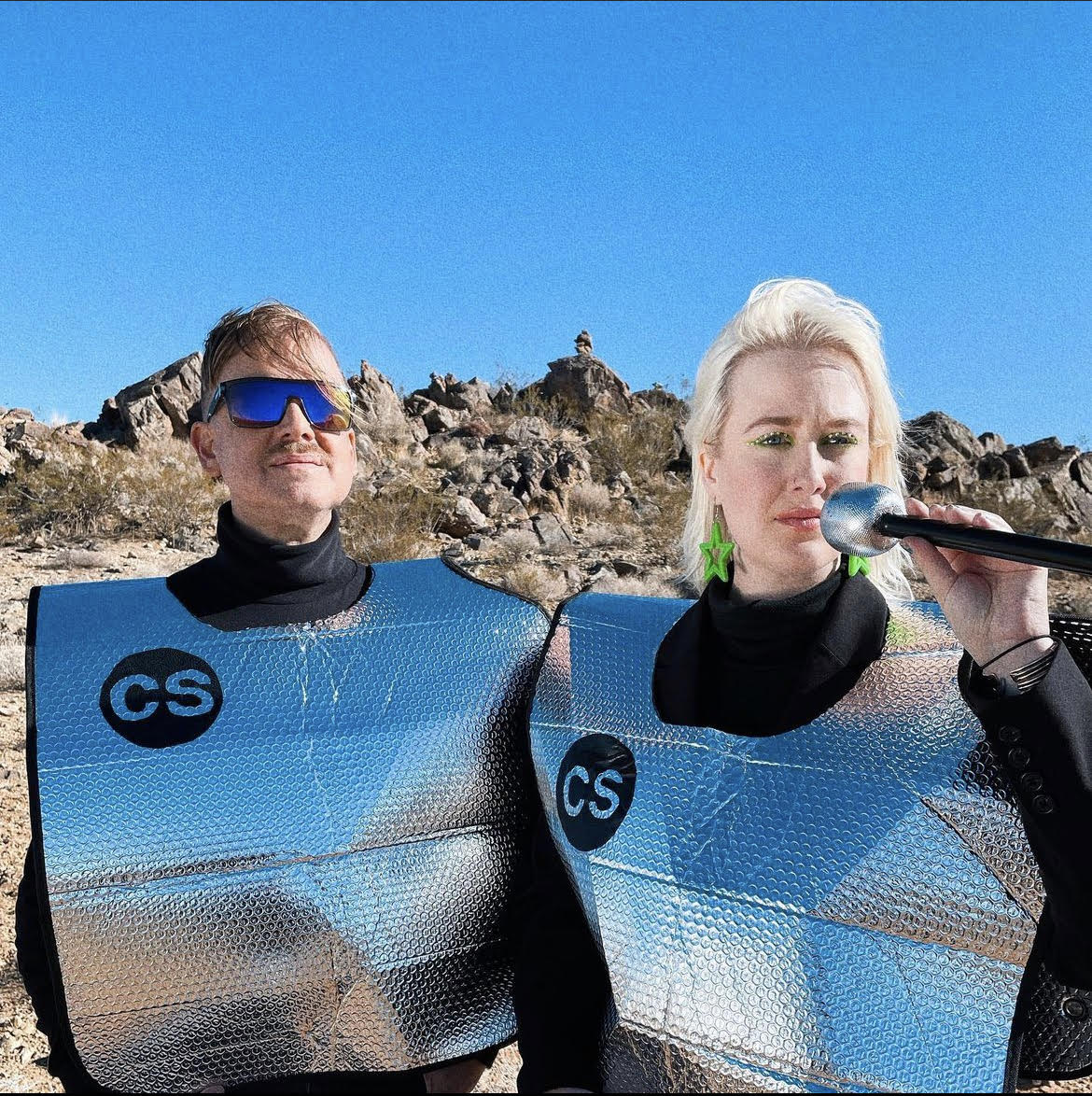 Meeting right before the pandemic, the band started creating music during 2020 and 2021. The magnificent singer of the band, Madeline (Maddie) Mathews, has moved from solo work to join forces with Josiah Mazzaschi. Mazzaschi is a respected guitarist and musician who has played with The Smashing Pumpkins, Jesus & Mary Chain, etc., and owns THE CAVE STUDIO in Los Angeles.

The band will be performing at the Harvard & Stone residency in Los Angeles every Monday of November.

The duo joined Avalon from KX FM for an interview.

How would you characterize your album?

Josiah: I’d say it’s a blend of many different genres and time periods. I’m older than Maddie, and I grew up in the 80’s and 90’s with new wave jams like Depeche Mode – that kind of vibe.

Maddie: I grew up with The Strokes, MGMT and all the 2010 indie sleaze bands, indie pop, indie rock, like when that was getting really big, the Yeah Yeah Yeahs. So we kind of combined our two forces and things that we love to create – definitely a mashup of 80s and the 2010 sound and our own unique twist too!

Did you guys face any challenges in the beginning with combining those styles?

Maddie: I don’t think so, it was pretty seamless.

Josiah: Yeah. A lot of the songs on the album started with me getting Covid, and I was in quarantine for about 10 days, and I just sat on my laptop and programmed beats and synths and stuff. I would send them to Maddie and she would come up with full on lyrics and it came together really easily.

Maddie: It was actually probably one of the easiest things I’ve ever done. We’ve been writing together for about five years now, and a lot of that was for my solo project. We were maybe going to try to do some things for TV and film placement, but when Josiah got Covid and he just sent over like a million tracks I just was like these are all amazing! This was before we even were a band. I guess I should back up. Josiah has been recording my solo album since 2017 and then Covid hit. I moved back to my hometown in Northern California, then I moved back here somewhere around the summer or spring of 2021. Then I moved back into the studio to finish the solo album with Josiah. Last fall 2021 like September or August, Josiah got Covid and was sick for like two weeks. So I wouldn’t go in the studio and record with him, but we still wanted to be creative while he was bored in bed and that’s basically how our band formed by accident. And basically we wrote our whole album in a month/month and a half.

Josiah, you have mentioned in the past that you used to not be able to afford going to studios, how does it feel to now own CAVE STUDIO?

Josiah: It feels great. I used to have so many limitations, and I never thought I would have the stuff I have now to basically make a full album in the studio. It is hard to focus on your own music…sometimes it’s hard to be motivated or pumped on my own music, but with Maddie’s vocals and vocal melodies, all her ideas pump me up for making some good jams.

Maddie, did you work on your solo project in CAVE STUDIOS?

Maddie: Yeah! The whole thing was recorded there – about 25 to 30 percent of the songs were co-written with us too. I met Josiah through my mom’s cousin randomly, he’s like 70 and he goes out to indie rock shows every night. He was hitting me up like, “I got Wet Leg tickets tonight!” and I was like, “You know Wet Leg?” He’s very hip with all the bands, but that’s how he knew Josiah and Josiah’s solo project. He had seen them for years and years and years and that’s how they got to know each other. And I (had)  just moved to Los Angeles. He sent him my first little EP and Josiah was like, “This is pretty good!” We just started recording my next album together, which took a long time obviously with Covid, but recorded it all here.

Maddie, you referenced moving back to Northern California during the pandemic, did the difference between the LA music scene and your hometown influence the album?

Maddie: My hometown is so small. In college at least, there was a music scene. I went to Chico State. But I wouldn’t say the bands around there influenced me. It was a really fun community to have and a support system, but in my small town it’s really just open mic. There actually was a lot of math rock, which did not influence me. I think more of the bands we talked about were more influential on us rather than the local scene.

Josiah: Before the pandemic we started our live CAVE STUDIO sessions, and Maddie would film it and I would record it and mix it. We were basically showcasing local Los Angeles bands before the pandemic, and it was a pretty cool scene with a good network of bands.

Maddie: I would say I’m slightly influenced by Living More, they have really cool music and he’s (Josiah) mixed with them before.

Bringing it back to the album, “Dancing Without Me” is one of my favorites, the lyric “Guess I’m a bad friend’ really sticks out to me, I would love to know more background on the song.

Maddie: Well, I’m trying to think of the best way to talk about this song just to keep it vague, but I feel like this song for me is…I’ve had a lot of anxiety throughout friendships and feeling like I was a bad friend. I had some relationships when I was younger with some friends that would often make me feel like I wasn’t doing enough or giving them much attention. I think it’s kind of coming into my adult life more – even in all my relationships. So basically, the song is about having anxiety about not being/feeling good enough. I had this horrible time in my life where I was experiencing a lot of chronic pain and I missed a lot of things. People stopped inviting me out, so some of the lyrics touch on that.

What was your favorite part of self creating your own music videos?

Maddie: That was a lot of fun.

Josiah: We kind of utilized whatever was affordable. We had friends who had an airbnb out in Joshua Tree, so we used their compound and swimming pool for “‘Fever Dream”.

Maddie: Yeah, we had some friends that just let us affordably go out at their really cool spot. Josiah’s wife is a makeup artist so she does all of my makeup. She’s extremely talented. My really great high school friend ,who is also out here, is a stylist, so she will pick out our things.

We stay on the cheap side – make our own outfits, conceptualize our own thing. Ben, my boyfriend, films most of it and then I edit. We kind of learned along the way. We did our green screen for “Burning” and I learned how to do green screen editing. When I did my solo work, I was with a little label and I asked for funding for a photo shoot. It was too much so I ended up buying a camera and that camera has stuck with me forever. My boyfriend will shoot all my photos, our photos, and videos. They’ve been really fun and we don’t put too much planning into them, we just hope for the best. But we will up our game with the next ones.

I do know that there is a second album in the works, can you give us a teaser of what the vibes are going to be?

Josiah: I think we are going to release a single early next year and a video, as well. But I’d say it’s like Bad Holiday times 10, right?

Maddie: I think this one is stronger, we were still figuring out our voice and didn’t really know we were forming a band when we started writing together. This one I feel like we have figured out what our strengths are. I feel like my vocals are a lot stronger – more rockin’ vocals. It’s like our song “Fever Dream” on steroids. A lot of our songs have new wave influences in them, too.

Maddie: There’s a lot of dirty songs in this one. We were really inspired by Wet Leg, so we have a lot more silly songs. But I’m really proud of it.

Josiah: The Who’s bass player played on one song.

Maddie: Our sax guy is back. And our next single is “Cherry Stem” which will come out in January. We have started playing that one live which is awesome.