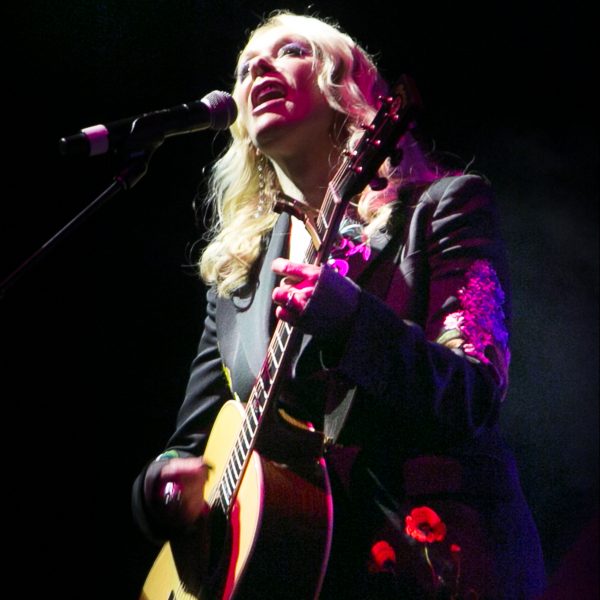 Just before the chorus of “These Dreams,” Nancy Wilson turned to look at Liv Warfield, shaking a tambourine with her eyes closed, and smiled. She then closed her own eyes and sang the words that took the song to every top chart back in 1986: “These dreams go on when I close my eyes/Every second of the night I live another life.” When Wilson reopened her eyes, Warfield was still dancing and now so was the crowd. 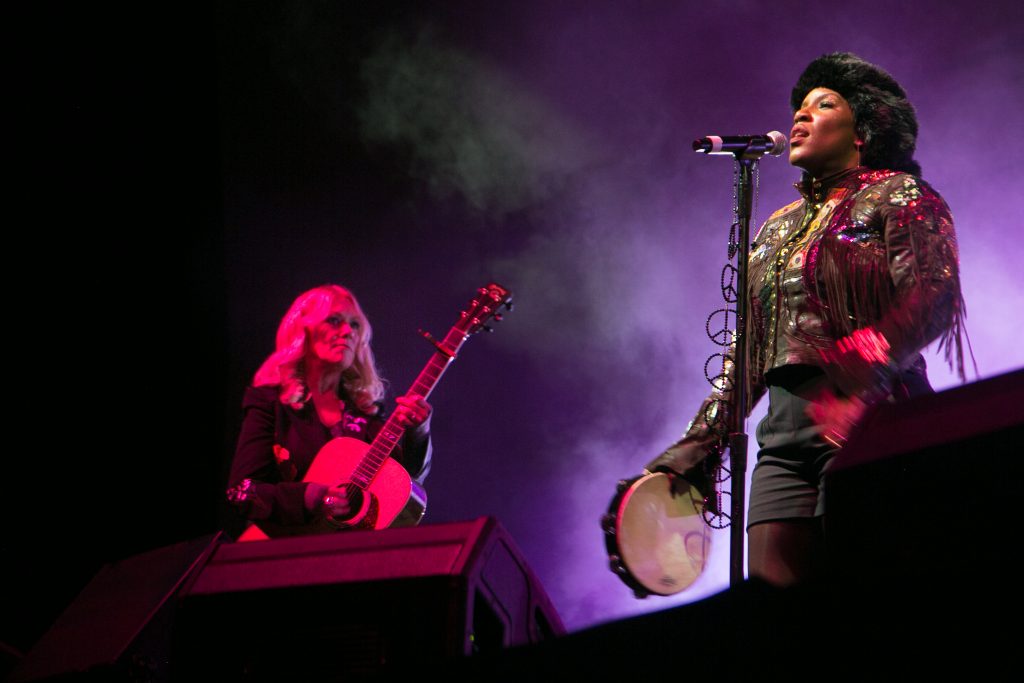 On a chilly night in early December, the Irvine Bowl opened its doors for KXMas, the only public event that occurs in the venue besides Pageant of the Masters. The atmosphere reflected this sense of only for tonight—like the amphitheater was open just for those strolling through its premises. Crowds gathered around inflatable snowmen and food trucks, some wrapped in blankets, others holding warm drinks. Scattered conversation of holiday preparation and plans melted in with the sound of carolers and applause. But talk of the future soon turned to reflection of the past, of the “good old days” when rock and roll was everywhere. Because the amphitheater doors would soon open and Nancy Wilson of Heart, a band which defined a generation, would transport everyone in the audience to a time when rock and roll was still being defined.

The definition is understood in the aftermath: the bands which followed Heart, two of which opened before Wilson, both of which were fronted by women. The first was Gothic Tropic, the indie pop brainchild of Cecilia Della Peruti, a singer, songwriter and guitarist who has toured with the likes of Beck and Charli XCX, but now tours with her own band performing her own music. That night, she eagerly took the stage, her personality as alive as the guitar in her hands, playing tracks off her recent debut and tracks not set to release until the next year. Between songs, she spoke of her hometown, New Jersey, slipping into an exaggerated accent most likely compiled from various aunts and grandmothers. She then spontaneously performed a brief, spur-of-the-moment Christmas song with improvised lyrics that had the audience belly laughing. “We’re Gothic Tropic,” she said before exiting the stage with her band, leaving a magnetic energy behind. 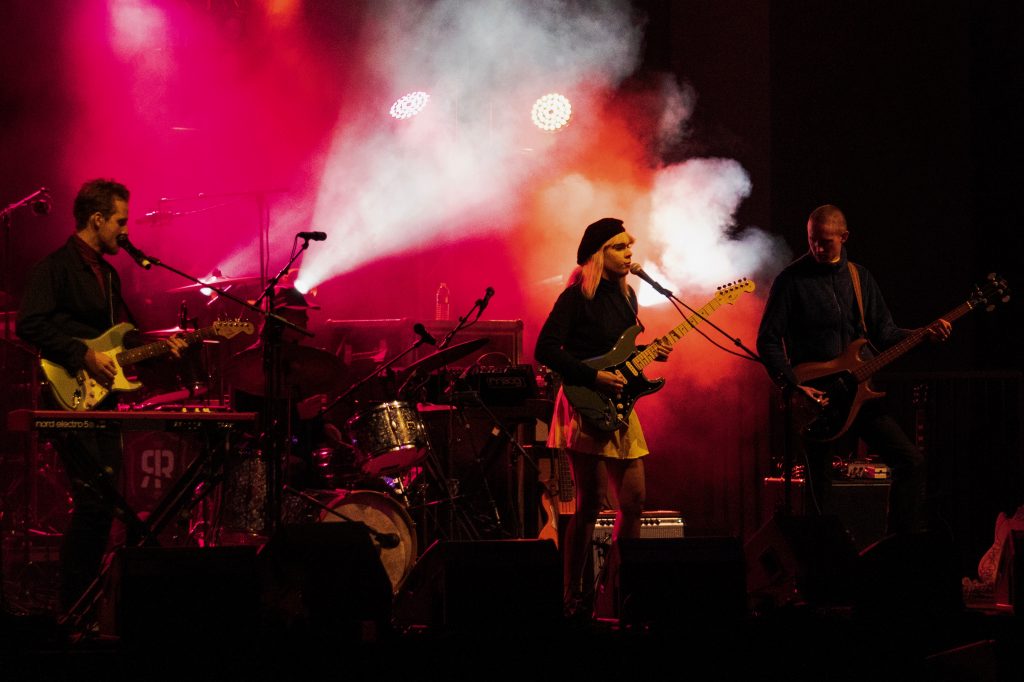 Up next was La Sera, originally the solo project of Katy Goodman turned duo with the addition of musician and Goodman’s spouse, Todd Wisenbaker. Together, they have created an alt-country-influenced sound, blending elements of dreamy ‘50s pop and sweet melodies. The result is distinctly Californian, reminiscent of palm trees and endless summer, scenery the band based in L.A. is used to. The pair, joined by a drummer, settled into stage immediately, Wisenbaker strumming away as Goodman bounced around on stage, her fiery red hair moving along with her. They, too, reflected on hometowns, in Goodman’s case, also New Jersey. “This one goes out to Walter,” the couple said before dedicating a song to their son. The audience cheered, shouting back “Walter.” Whether or not their son heard the song from backstage in the dressing room, Goodman and Wisenbaker looked thrilled, jumping into the song by both shredding on their guitars. 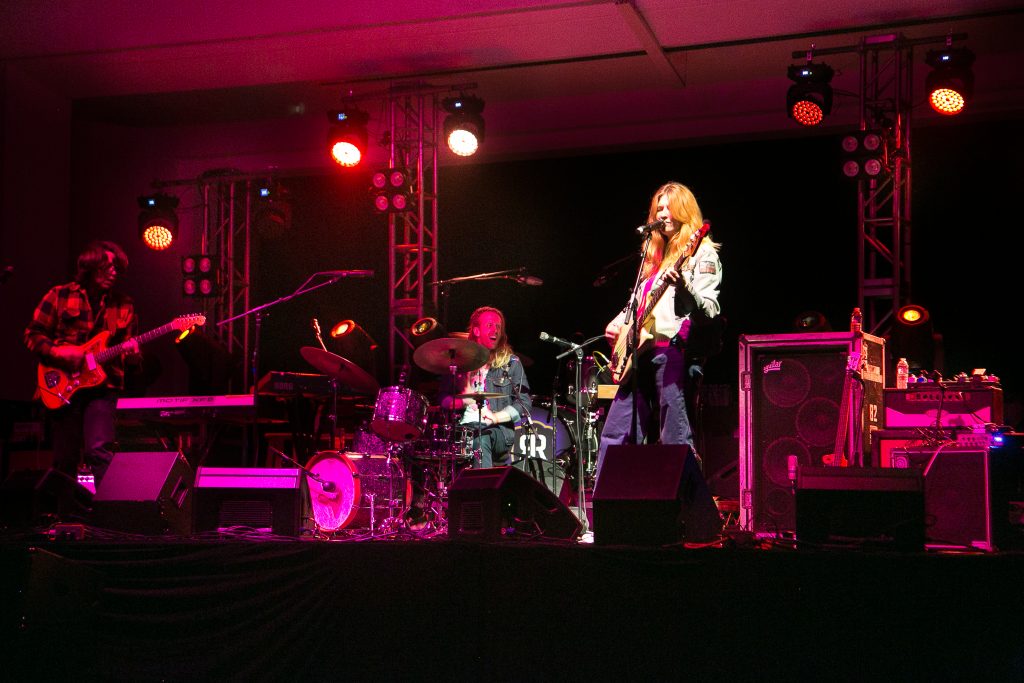 Before long the moment arrived for Wilson to take the stage. Yet she wasn’t alone. Joining her was Roadcase Royale, the band she formed with Warfield, a longtime Prince collaborator, blending soulful R&B with smooth rock into something entirely new yet familiar. Playing songs off the band’s 2017 release, their sound was clean and captivating, the result of two minds and four ears who have both made and experienced music history. Wilson paused between songs to switch guitars, to introduce her band, to speak of music, to reminisce on memories and to touch on what it means to be alive in 2018. She then let the music do the talking, covering Foo Fighters’ “No Way Back.” “I’m fighting for you, pleased to meet you, take my hand,” Wilson sang. From the look on her face it was clear she meant every word. 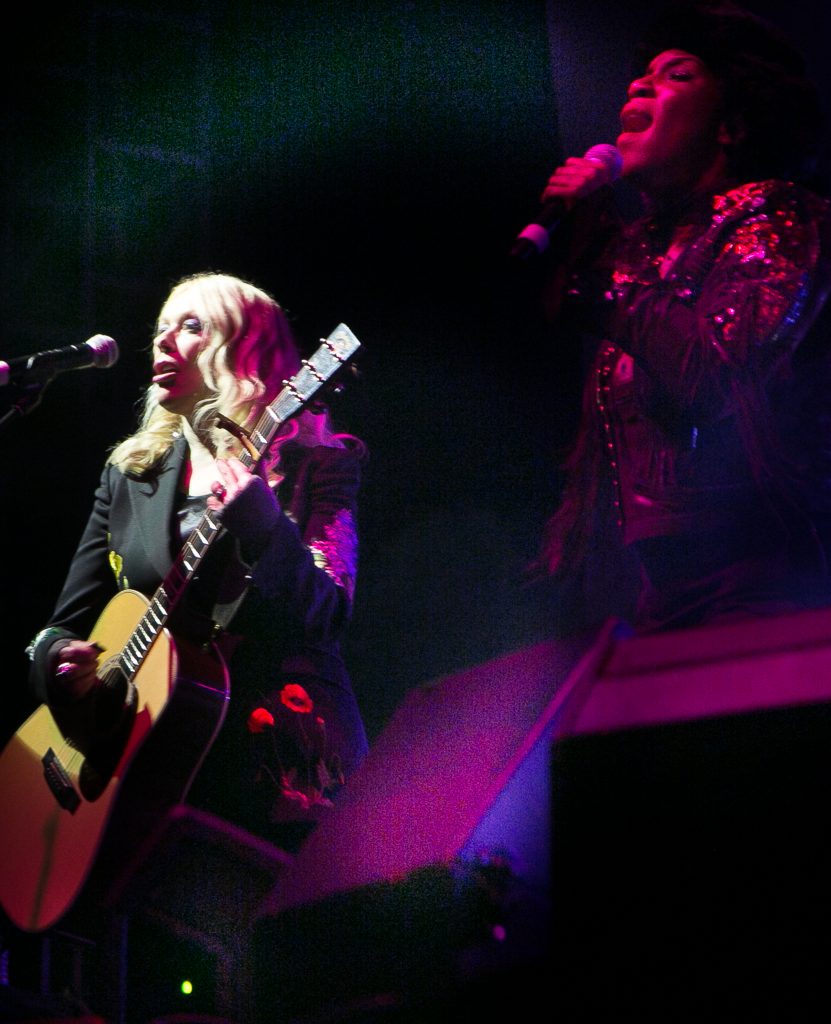 Wilson went on to cover such greats as Tom Petty and Pink Floyd, moving the entire audience as she gracefully paid respects to the musicians that both influenced and drew influence from Heart. It was an act only Wilson could do. The audience rose to their feet and cheered, happy to hear songs from their youth made alive again. They couldn’t help but dance like no one was watching. But Wilson was. “We got some really good dancing going on here tonight,” said Wilson.

The dancing was echoed back on stage by Warfield, who embodied the lyrics she sung and Wilson’s guitar riffs. Warfield presented an authenticity so vivid and exciting, even Wilson couldn’t keep her eyes off her, especially when it came to covering Heart songs. No, it wasn’t Heart exactly, but it was the same in energy and spirit. It’s what Wilson wanted. “We want it to sound different so you don’t think you’re shopping at Ralph’s. No, this isn’t Ralph’s,” said Wilson.

The lyrics came alive with Warfield’s powerful vocals and Wilson’s skill as a guitarist. From “Silver Wheels” to “Crazy on You,” Wilson and Warfield had the entire audience on their feet, moving along to the songs that defined a generation of music lovers if not an entire decade. The whole time Wilson had a smile on her face that reflected a deep joy in seeing her old songs refreshed with new emotions and character. It was a smile that stayed on stage even when Wilson left it and the audience roared for more. 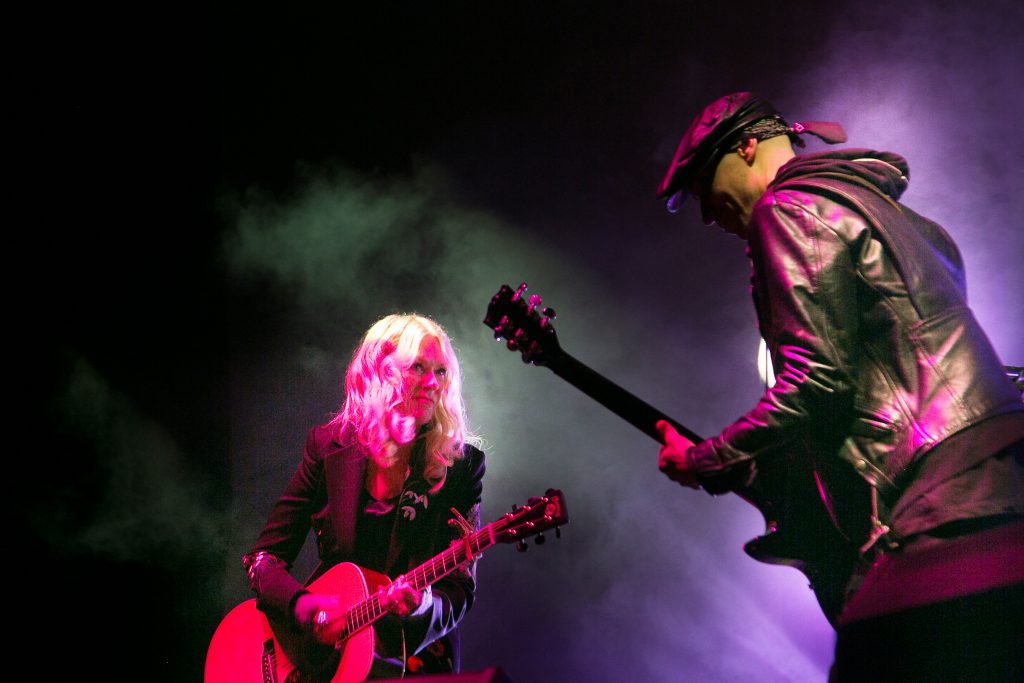 Then, from the back of the amphitheater arose a word that quickly swept through the entire venue: Barracuda. Five chants later and Wilson was back on stage along with the rest of her band. With a new guitar in hand, Wilson gave the crowd what they wanted, performing the iconic riff perfectly as the audience hummed along. Warfield grabbed a mic and began singing, giving her all into every single word. The audience performed backup, echoing the words and clapping along to the beat. By the time the song was over, hardly anyone realized the moment was gone.  “I can’t believe that just happened,” said an audience member. Neither could Wilson as she thanked the audience and reminded them to be kind to each other, happily staring at her band members before finally exiting the stage.