Old Friends and New Friends: Pinegrove at the Observatory 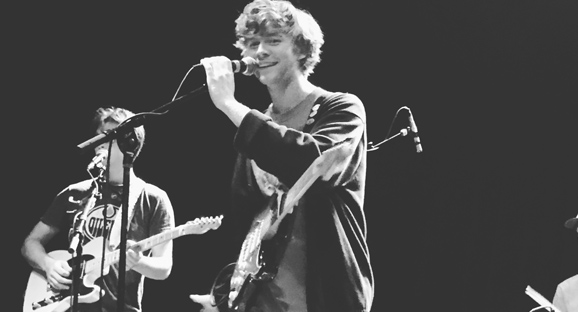 On a warm Indian summer night in early October, the Observatory OC, in Santa Ana, CA, was filled with EDM
fans for a group called Hippie Sabotage. Meanwhile, tucked in the Constellation Room, a smaller
crowd of youths sipped on PBR and chatted amongst themselves, waiting patiently for
the first act to play. That first act came onstage dressed in khakis and a baseball cap—
Hannah Read of Lomelda. With support on drums, Read’s guitar and voice filled the
space, managing to win over the hum of the AC unit. At one point, Read noticed it and
prompted everyone to be silent to let the AC’s monotonous sound take over for a few
brief moments.

It was a quick transition into the next set, which was self-proclaimed friendship project
Florist, fronted by Emily Sprague. Opening with the fragile “Red Bird”, the trio played
mostly new releases (their sophomore album, If Blue Could Be Happiness, came out
just weeks ago). Despite the somber melancholy that surrounds their music, Sprague
was upbeat and pleasant. The set was sprinkled with words of thanks and quick, funny
stories. The gentle acoustic songs were met by a receptive, subdued audience.

Even headliner Pinegrove didn’t inspire any roughness from the crowd. As they took the
stage, the energy became intensified, but the same respectful atmosphere remained.
Read reappeared as Pinegrove’s guest bassist, this time sporting an “I <3 Basketball”
lanyard on her belt loop. Evan Stevens Hall stepped up to the mic and gave a friendly,
unassuming wave. The band jumped straight into “New Friends”, with Hall singing “Is
there anyone here I know?” while looking into the crowd as if he were really searching.
Pinegrove strikes me as the type of band that would be fun to go to summer camp with.
The camaraderie between the band and the other acts could be sensed simply by the
way some members traded off baseball caps in between sets. Their good humor
radiated. In between songs, the band shuffled around, Hall retuning his guitar while
sharing anecdotes of smashing glass bottles at his job at his college’s recycling center.
But the informality was fitting, and it gave the room a house show-like vibe. They took a
break from their well-treaded repertoire to introduce some new material, including a
song called “Intrepid”. Pinegrove bookended their set with their most popular song, “Old
Friends”.

There’s a phrase taught at Girl Scout camp that goes, “Make new friends but keep the
old, one is silver and the other’s gold.” And standing in a crowd of new and old friends, I
felt that Pinegrove’s show testified to this— while they’re still moving forward, they
haven’t forgotten the ragged, heart-centered place where they started.