Tennis Brings their A-Game to the Constellation Room 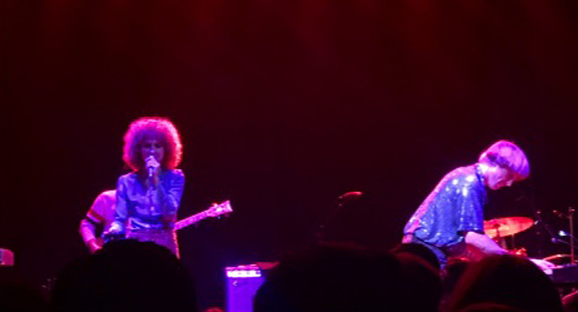 “I feel so badly that you’re stuck out in the hallway. Here, we’ll play this one for you.”

When Alaina Riley, the female half of the dream-like dream pop duo Tennis addressed the few unfortunate souls unable to worm their way into a sardine-packed Constellation Room at the Observatory in Santa Ana, California, she spoke genuinely. No need for irony or laughs, not from the pair that immerses themselves so seriously in their music and was so clearly appreciative at the strong fan showing. This being a somewhat more intimate venue than they have playing on this tour, the air was thick and hot, and the band embraced the tropical milieu, making an expansive, sprawling, sweaty case for why they are now essentially defining the dream pop landscape.

Opening the show was Wild Ones, a Portland-based band who are self-confessed fans of the headliner. Danielle Sullivan, in a metallic hoodie, comes out and introduces the band matter-of-factly, announcing that they were Wild Ones from Portland, Oregon. Having never been acquainted with their sound, this was the moment of truth.

They kicked their set off with the ethereal “Paresthesia”, quickly established that Wild Ones are not your average indie pop band. It’s hard to define, but Wild Ones are downright captivating. Part of it comes from Danielle’s energy, whose performance is sprinkled with a bouncy, intellectual polish, layered with a smart, darker knowing. Their feel was entirely organic. There was a certain honesty in her performance— she let the songs speak for themselves, simultaneously getting lost in the music while remaining grounded in the reality of the moment.

This was no-nonsense, straightforward pop music that was the perfect lead-in to the headliner. Then it was time for some Tennis.

The band, again playing larger venues on this tour, settled right into the small space. This night was a chance to catch Tennis up close and personal. The husband and wife duo of Alaina and Patrick Riley (he, dressed this night in a dazzling, turquoise sequined top) have finessed a certain look and vibe that emulates a fresh, modern take on a 70’s disco club. The set brought to light Tennis’ latest EP, WE CAN NOW DIE HAPPY. However, it was their latest LP, YOURS CONDITIONALLY, that drove the show. The lights came up to the delicate trills of “Island Music”, creating the dreamy soundscape that would inhabit the stage for the next two hours.

After packing a powerful punch with “My Emotions are Blinding,” Alaina addressed the audience for the first time. In lieu of wordy stage banter, she simply concluded with a sly smile that “there’s work to be done” before diving straight into “Fields of Blue”. Tennis is a powerhouse, churning out songs like a well-oiled machine. That being said, the performance never felt mechanical; Alana and Patrick while working hard and physical, also convey light airiness and sense of mystique that always keeps the audience on edge, curious and dialed in. Their effervescence was infectious; a real-life relationship being scored and sound-tracked before our very eyes and ears.

Despite her efficiency, Alaina found some time to cozy up to the audience with an anecdote. Before “Ladies Don’t Play Guitar”, Alana shared that as a kid, she was made to play piano over guitar because it was more “feminine”. She confided that there’s a part of her inside that was born to shred, and that luckily she found herself a shredder to complete her.

They have stepped into their roles, Alanna as the groovy siren-esque front woman and Patrick providing the backbone on guitar, weaving together sinewy solos along with melodic washes of pure pop treasure, mined from the very real seas they have so famously traveled together in creating their music.