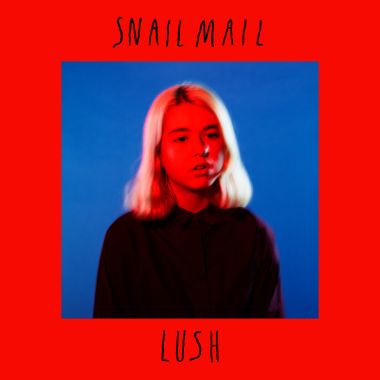 There’s an entire great big world out there, beyond the suburbs, Maryland and everything 19-year-old Lindsey Jordan knows—but she can’t help but wonder if her crush is thinking of her. It’s the beating heart of the paradoxical teenage experience, the interwoven feelings of longing and uncertainty, arrogance and shame, so often reduced to clichés. But Jordan, otherwise known as Snail Mail, makes it feel brand new, partially because it all is. With her band’s debut album, Lush, Jordan embraces that sense of unknowingness, familiar territory for the teenager still growing-up, holding on and waiting to let go. She doesn’t hesitate to ask vulnerable questions, to let her voice wail, to confess undying unrequited love, to get lost in hypnotic guitar rhythms; she embraces uncertainty with a rare honesty, taking control of every note and feeling, maturing before our very ears.

Despite all the confusion, Jordan knows who she is. “I know myself and I’ll never love anyone else,” she proclaims on the album’s first single, “Pristine.” It’s a confidence heard in the song’s powerful chords and guitar riffs, second-nature to the guitarist trained under Mary Timony (Helium, Ex Hex). And when Jordan sings out, “I could be anyone,” cleanly backed by bandmates, Ray Brown and Alex Bass, she’s not doubting but declaring. In just a statement, Jordan realizes the magnitude of time and being, of who she is and who she can be. It’s a revelation she carries on throughout the album, but has its roots outside it, in Snail Mail’s earlier days.

Released in 2016, Snail Mail’s first EP, Habit, is marker of just how far the band has come both musically and lyrically, but more a reminder of the force that is Jordan’s perspective. On Lush, we hear that same perspective—only this time, it’s expanded. She sings to “you”s and “green eyes,” reminiscing on better times, of melancholic suburban parties, of moments shared only between her and a lover; she shares her whole world with the listener, every small detail included. That’s why it feels so real—because it is, every last bit.

Where Lush stands out is not in the answers it provides, but the questions it asks. “Don’t you like me for me?” “What could ever be enough?” “Who’s your type of girl?” “Do you love me?” Her voice just on the verge of cracking, Jordan asks these unflinchingly of a subject never to respond—how could one answer? And Jordan knows that, her questions often becoming means of self-reflection, much as the album’s moments of bittersweet pain are vehicles for personal growth. “I’m not into sometimes,” Jordan’s voice sincerely releases at the end of “Heat Wave,” having answered all her questions with a realization of the person and lover she is.

That doesn’t make the rejections she feels any less painful or her thoughts any less insecure. “Stupid me,” Jordan repeats over and over again in the final moments of “Golden Dream.” It’s not directed at a particular incident or moment, but rather all of it—and we feel the same dread and self-hate with each repetition, our mind buzzing with memories we try so hard to suppress. Jordan does the opposite; she transforms fear into hope, heartbreak into courage to love. It’s the only way she knows how to move on.

And Jordan isn’t trying to speed things up. As of now, Jordan is still young, still just being heard. Unlike most her age, Jordan is unashamed of her youth. She doesn’t try to be anything she’s not, to sweep the daily trivialities of teenage life under the rug. She plays it for what is is, because she knows it’ll all be over soon.

As sentiments shift between what could have been to what will be, each feeling flowing into the next, emotional intensity reaches its tidal wave high with, “Deep Sea.” Jordan’s voice is magnetic, her words drawn out, leaving time to think, to fall into one’s own daydream. She once again finds herself realizing her place within the universe and just how special finding that one in a world full of anyones is.

Jordan closes the album with a return to the beginning, a fitting end for the teenager still processing it all. The album’s first track, “Intro,” a sleepy, stagnant opener, Jordan’s voice more a ghost than a presence, like the feelings are still waking up and taking form, is reworked into “Anytime.” Though the lyrics and melody are the same, the feeling has completely changed. Jordan’s wide awake—she’s said what she has to say and is eager to get the last few words out. Her voice is unprotected, accompanied only by an acoustic guitar and organ heard faintly in the background; we hear her for who she is. And though the words escaping her mouth are heavy, her voice is light; she’s let it it all go, lost somewhere in the music.

But she’s still a teenager, and there are some things, first love included, she’ll never be able to let go. “And still forgive you anytime,” Jordan confesses before the album’s last few notes. It’s a gut-punching sincerity that cuts deeper than any guitar line or cymbal crash could. It’s Lindsey Jordan, loud and clear.