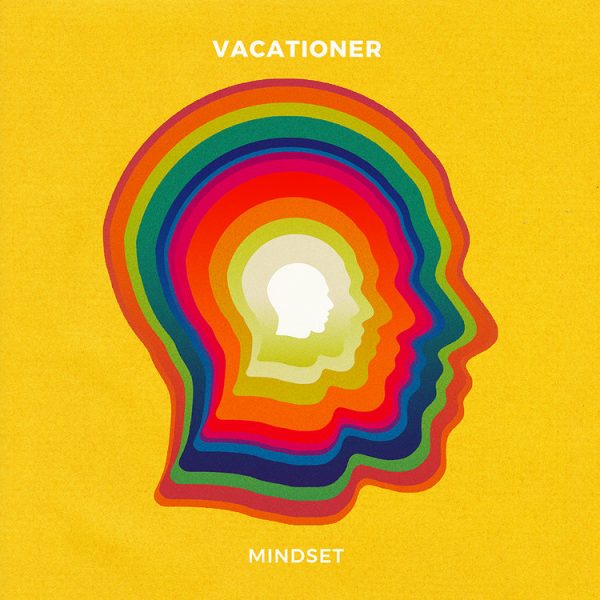 There’s nothing escapist about Vacationer, the band who—despite its name—has opted out of sandy beaches and tourists traps for the ultimate staycation: a trip to a new state of mind. With the Philadelphia dream-pop band’s third studio album, Mindset, it’s clear it’s a trip worth taking. There’s no getaway destination, only a hazy soundscape of dreamy vocals and warm melodies that seeks to get lost in; it’s an escape within oneself, an invitation to be here, wherever that may be.

The album comes after four years of self-reflection since their 2014 release, Relief, capturing that same breezy energy in a completely new sound. It’s the result of frontman, Ken Vasoli’s, new approach to music-making, an ongoing process in which he found himself stepping into the production realm, overcoming false starts and completing a majority of the album on his own. Working closely with producer Daniel Schlett (Ghostface Killah’s 36 Seasons), Vasoli intricately interwove numerous samples and layers of instrumentation into a complex web of sound. But Vasoli maintains a clear vision, never getting caught up in one particular sound or melody; he knows what he’s doing and where his head is at.

And that’s apparent from the first notes of the album’s dreamy opener, “Entrance,” which quickly envelops the listener in a world of mellow synth and euphonic harp—the inside of Vasoli’s mind, his happy place. It’s a fitting beginning for an album dedicated to mental well-being, the track equal parts self-reflection and optimistic thinking. All anxieties are calmly swept away with Vasoli’s positive perspective; there’s no room for overthinking, only feeling. Vasoli’s relaxed and energetic voice reflects that feeling; he’s ready to open his mind and happy to be where he is right now, unworried by the past or the future. He’s entered a mindset unweighted by daily burdens, taking everything for what it is, seeing clearly for the first time in his life. “Closer to it then I’ve ever been in my life,” Vasoli repeats throughout the song, the smile on his face heard in his voice, his clear headspace heard in the music.

The positivity flows into the upbeat, “Magnetism,” the album’s first single, setting the album’s direction in place, while exploring the newfound experimental sounds of Vacationer. Backed by a retro uptempo rhythm, Vasoli fearlessly embraces the mysteries of love and accepts the indescribable force that brought him his lover. The song abruptly cuts into the first chiming notes of “Euphoria,” capturing the album’s overall feeling as Vasoli basks in the now, losing himself in every moment until the song fades into silence, then the first energetic beats of “Being Here,” the album’s heart and soul. Sounds of the ocean accompany a lush blend of psychedelic synth, Vasoli’s gentle voice a hazy presence. “Being here means seeing clearly/Being here means calming down,” Vasoli reminds himself in the chorus, acknowledging how simultaneously easy and difficult it is to slip into a certain mindset. But Vasoli pays attention to his reminder, remaining in the present and forgetting all negative doubt: “Seeing the trees for the leaves/And all the grass for the weeds.” It’s Vasoli at his most self-knowledgable and Vacationer at their best.

Though their scope is large and only expanding, it’s the small moments that matter most to Vacationer. On “Strawberry Blonde,” though the first verses appear as though Vasoli is addressing a lover, it becomes clear that he is singing to his dog, describing a connection found nowhere else but in the creature standing in the doorway waiting for his owner to return. Its sweetness is matched by its vulnerability, heard similarly in “Late Bloomer,” in which Vasoli transforms confessions into means of gratefulness. “Just a late bloomer/Glad to be blooming at all/It could not have come sooner/Grateful to be opening up,” Vasoli professes, his optimistic mind unable to be shaken.

To Vacationer, it’s all about perspective. As heard in the rhythmic “Turning” and the groovy “Blue Dreaming,” every answer lies inside, waiting to be found; it’s merely a matter of changing your mind. The album’s pop tempo slows with “Green,” an endearing tale of emotional transformation, of turning rust into green. It’s an enchanting lullaby of the difficulty of depressive thoughts and the hope of happiness. Instead of running away from those thoughts, Vasoli finds peace inside, choosing to look in rather than out, to be here.

Self-reflection reaches its apex with the closing track, “Companionship,” the most lyrically complex song off the album. Vasoli finds himself opening up even more, discussing the struggles of loneliness, disengagement and depression that once occupied his former mindset. Through his vulnerability, Vasoli transcends the negativity, free from “the depths of paranoia and onto the surface of honesty.” It’s there that Vasoli discovers the answer in form of another individual, a companion. “Not on my own anymore,” Vasoli blissfully sings along to shimmering harp, delighting in his current state of mind that he no longer has to share alone. What Vasoli has found is unity, the joining of two sets of minds into one. Though the music fades from dreamy harp arpeggios to silence, the mindset lives on, in this moment and the next, begging to get lost in and understood for the importance of right now. It’s a vacation that asks you to get away from it all, only to end up finding yourself.