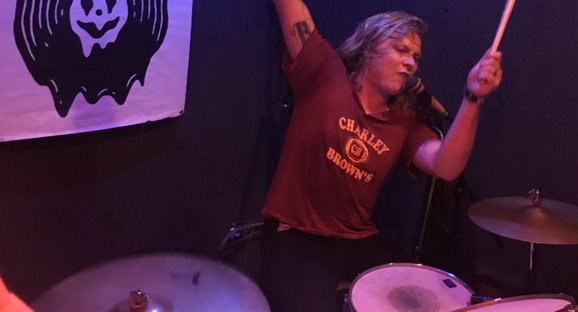 Ty Segall demonstrating his incessant musical prowess on drums, the instrument he originally started out on.

On Wednesday June 27, hometown hero Ty Segall performed at the Sandpiper Lounge in Laguna Beach with his garage-surf-punk trio, The Traditional Fools, as part of the monthly Wax Ball, an event put on every third Wednesday of the month to showcase live music in local bars. The Traditional Fools consists of Ty Segall, Andrew Luttrell and David Fox, first formed when the three Laguna natives relocated to San Francisco for college. They were opened by Kamikaze Copilot, a thrash-rock band that left even Segall nodding his head in delight, their songs ranging in topics from cops to aliens abducting all your beer. The Traditional Fools played many songs from their 2008 debut LP, starting off with a high-energy rendition of their track “Snot Rag” before launching into other dynamic songs such as “T.L. Defender,” “Layback” and “Please,”  all blending Dick-Dale-era surf with the DIY garage sound of bands like The Mummies and The Stooges. While Segall is no stranger to playing as part of the Wax Ball, the Sandpiper Lounge is a much smaller setting than the venues Segall can ordinarily be seen at. The intimate nature of the show enabled both bands to loosen-up, giving the crowd two fun, moshable sets. Highlights include Segall switching from drums to guitar halfway through the set, a laid-back cover of “Funk No. 49” by The James Gang and Segall starting a “Truffle Butter” chant in-between songs. The night was closed off by The Traditional Fools playing their cover of Thee Headcoats’ “Davy Crockett” as an encore, complete with the crowd drunkenly yelling along to all of the “Uooooohs” and “Gabba Gabba Heys,” leaving the barroom with the exhausted euphoria that can only result from pure, unadulterated rock and roll.