Bear Hands here to stay with “You’ll Pay For This” 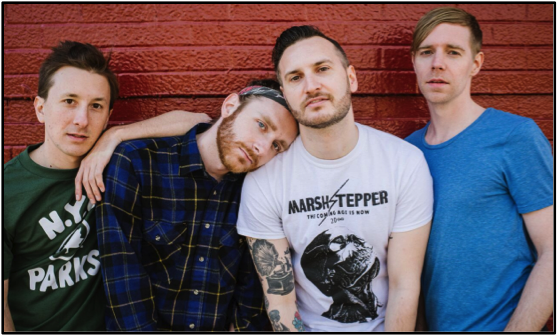 It’s only been a little over two years since Bear Hands released Distraction and had “Giants” climb to number 8 on the Billboard Alternative Song Chart, and already you can hear the growth they’ve made in that time on their latest album, You’ll Pay For This. After playing a series of festivals around the country and opening for Cage the Elephant, Rau found some time on the day of Bear Hands’ album release to talk with KX FM 104.7’s Tyler Russell on Full Album Fridays and discuss each one of their new tracks.

Famous for an eclectic mix of falsetto, guitar riffs, and electronic beats while maintaining their garage-punk feel, Bear Hands navigates these diverse characteristics yet again into an almost cinematic masterpiece. A strong and enticing electro-pop intro in “I Won’t Pay” sets the premise for an album of experience in both sound and lyrical content.

The next track and first single from YPFT, “2AM,” is about “getting older and making better decisions,” as Rau states, which not only applies to “college kids around the country,” but also seems to apply to the band as a whole. A cleaner sound resonates throughout the tracks, and while Rau acknowledges that the album is made up of distinct, individual tracks rather than a thematic collection, a definite sound of maturity can be heard from start to finish.

“Déjà Vu” and “Like Me Like That” are two infectiously upbeat pop songs, with the former incorporating a brass sound unlike any previous tracks heard from Bear Hands and the latter incorporating a chorus so catchy you can’t help but dance to it. In “Too Young,” Rau delivers the “Youth is overrated” line that describes the great transformation Bear Hands has made since both of their first two albums.

“Marathon Man,” the second single released in advance of the album, already has crowds singing and dancing along, and for good reason. “People seem to know [the singles],” Rau admits, “We’re very excited about that.”

The album ends optimistically; “Purpose Filled Life,” according to Rau, is “about proving yourself to other people and thinking that maybe your life meant something after it’s over.” The initial lyrics are dedicated to Rau declaring his intent on not letting his family down, ultimately declaring “I’m gonna earn my place at the table.” After the album’s over, we can all agree that Bear Hands has definitely earned their place thus far, and we can’t wait to see where they go from here. If this album is any indication of how the four men of Bear Hands can take the best of their previous work and use it as a foundation for their next endeavor, we here at KX FM 104.7 are excited to see how Bear Hands tops themselves the next time around.

Head over to bearhandsband.com to grab this new album and to see when Bear Hands is playing by you, and listen to the full interview with Rau on KX FM 104.7 here.